At long last, and thanks to Prof. Robert Slayton, we have recovered the fabled school song of David Farragut Junior High School (JHS 44, The Bronx). Here for your listening pleasure are the lyrics, as well as an mp3 of yours truly singing them. My first attempt features my voice cracking, but I will re-record it with 100 piece orchestra as soon as I re-assemble the school band.

Let’s give a cheer for dear old forty-four
For all the boys and girls who’ve gone before
Let’s cheer the green and white
And shout with all our might for David Farragut!
He won the battle at Mobile that day,
He sailed the Union fleet right up the bay,
He dared torpedoes in that bay,
And blasted forts along the way,
He saved the Union fleet that day!
Dear “Old Salamander”
We praise thy name,
Our hearts with love aflame,
Honor thy great name.
Though soon we will graduate,
Our love ne’er will wane,
Though we may wander far,
Our thoughts will return again.
So here’s a toast to dear old forty-four,
To Salamander’s part in navy lore,
And to his flaming spirit claim,
We’ll add more glory to his name,
Dear forty-four forevermore.

Note: A few extra notes and corrections as a result of correspondence with several alumni of JHS 44: Mitch Turbin, Rob Slayton and Larry Pryluck.

Due to a family move between the 8th and 9th grades, I attended two Junior High Schools. My 7th and 8th grades were located within the ancient (19th century) halls of Junior High School 44 which had taken the name of David Farragut, America’s first Rear Admiral and a hero of both the War of 1812 (having enlisted at the age of 12!) and the Civil War. Those of us in the Bronx didn’t know much about New Orleans, so the tales of David Farragut were my first introduction to that exotic place. 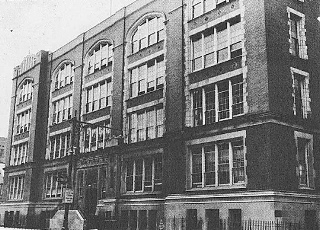 Much to the chagrin of the school, its most famous graduate was Lee Harvey Oswald, the assassin of President of John F. Kennedy. Most of us who lived through that event recall exactly where we were at the moment we heard the news. I was in JHS 44’s Wood Shop when the announcement came over the school speaker. I think we went home early that day, although I don’t recall that clearly. Some time later I noticed that one of the names carved into a desk where I sat was Lee Oswald. It may have been the prank of one of my contemporaries, who knows.

If I remember correctly, the school had two graduates more worthy of recall. Dr. Jonas Salk, the inventor of the Polio vaccine, and Hank Greenberg, a rare example of a Jewish major league baseball player.

On a visit to New York City a few years ago, I found myself close enough to 44 to take a walk over and see how the old building was faring. I was surprised (actually) to see that it was still in operation, but it is now an elementary school, grades K-6. It was a little sad. Not exactly my fondest memories to begin with, no one seemed to have the remotest interest in talking about the school’s former glories. So I left without much to show for my interest other than the dying embers of a few more synapses. It turns out that JHS 44 was at least in part an elementary (K-6) school even in my day. Larry Pryluck actually attended K-1 there. I don’t know how many other schools were like this in New York City, combining the youngest school children with middle schoolers, but it would be interesting to discover. Larry then joined me in Mrs. Mitchell’s 2nd grade class at PS 92.

Larry reminded me of another of JHS 44’s distinctions, although it was hardly a credit to the school so much as the neighborhood. Strange as it may seem now, that crumbling part of the Bronx was home to a televsion studio-Biograph Studios. Biograph was the home of Naked City and Car 54 Where Are You? Naked City was a bit before my time, but I remember Car 54 very well. The cast included Joe E. Ross, Fred Gwynn, Al Lewis and Nipsey Russell (!). I don’t know how often these guys were seen around the neighborhood, but a few of my family were in the background of scenes shot on Southern Boulevard. Naked City is easily available at this time, but unfortunately Car 54 is out of print as I write this. There is a movie by the same name, but it has the distinction of being rated the worst film since Ed Wood’s Plan 9 From Outer Space so I wouldn’t recommend it.

David Farragut JHS had a somewhat well-known school song which celebrated its namesake. Although just about every High School has a school song, Junior High songs are not common, and good ones are rare. JHS 44 had had a good music teacher who came up with a song I’d bet would be a candidate for “best in show”. The one time that Google has failed me in recent years is the time that I put in some of the words expecting to find that one of my classmates or teachers had uploaded the words to the song, but nothing turned up. There are gaps in what I recall, so here’s my first attempt. If others can help me fill in the gaps, I’d post a music file to preserve this little memory of a Bronx backwater.

Lets give a cheer for dear old 44

For all the boys and girls who’ve gone before

Lets cheer the green and white

He sailed the Union fleet right up the bay

He won the battle at Mobile that day

We praise thy name

Our hearts with love aflame [maybe]

Though soon we will graduate 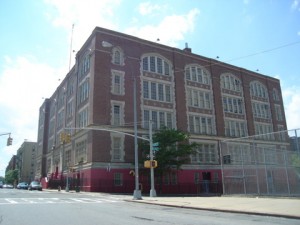