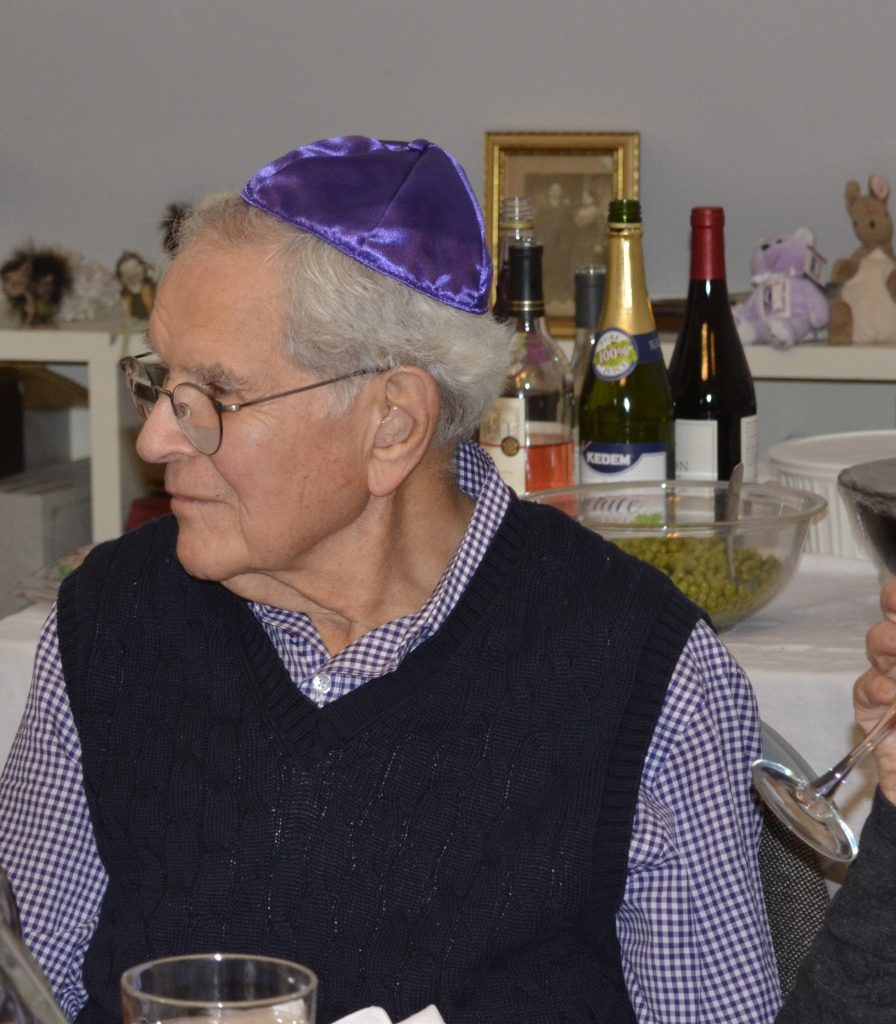 We learned of the passing this last weekend of a dear friend, Dr. Harold Diftler. Harold and his wife Joyce were among the first people to welcome us to Knoxville.
Harold was one of the most prominent dentists in the region and there are many accolades from his professional colleagues. But nothing tells the story of Dr. Diftler better than the simple fact that he turned no one away over his entire career, and never complained when his patients could not the afford the care.
Harold was a veteran of the U.S. Navy. As a member of the Knoxville Track Club he ran marathons all over the USA. His collections of antique clocks and watches are renowned. He was able to converse about many subjects because he so valued education that he never stopped taking courses–in recent years University courses in history, film, political science, anthropology and music.
Harold is pictured above from our Passover Seder in 2015. May his memory always be counted as a blessing. May his memory be entwined with ours so that he lives on forever through us.
Blessed is the True Judge.

It’s been a while since I’ve posted here. As some of you know, I’ve been focused on passing my Ph.D. prelims which thankfully is now past tense. (For the third time!–I hope this time I’ll actually have the sitz fleisch to write the required short paper.) I have a lot of catch-up to do and I doubt I will, but I wanted to share a few thoughts about a recent experience Terri and I enjoyed.

It took us four years to get there, but I finally went to Pigeon Forge, home of Dollywood, this week. We were the guests of alumni of the U of Tennessee and we had a country style dinner followed by a visit to the Christmas show at the Smokey Mountains Opry.

The show inevitably reminded me of the many fine memories I have of the Christmas show at Radio City Music Hall. While the Rockettes were not in evidence, there were singers, dancers, acrobats and a cranky old comic magician billed as “Slim Chance.” Some of the dancers were of Bolshoi quality because they actually immigrated to the U.S. after being in the Bolshoi.

The singing was polished and professional, and I was impressed that the long first act had very little religious music; it was all from the new canon of American winter holiday music. I wondered if the organizers knew how many of those songs were written by Jews working out of Tin Pan Alley.

The second act did feature a number of traditional Christmas carols and a manger scene–but after all, so does the show at Radio City. The religiosity expressed during the show is more in line with what one expects in the Appalachian region as opposed to the Catholic and Episcopalian Northeast, but after all, that’s what makes it a Tennessee production!

The part of the evening, though, that stays with me the most are the comments made by our hosts. Their family is deeply involved in the financial success of these Appalachian regional shows. And our dinner conversation touched on the difficulties that they have making the shows profitable. Unlike the Disney scene (which I’ve commented on extensively elsewhere in this blog), this show is part of the Appalachian region and caters to an audience primarily situated there. Our hosts lamented that even the people of Knoxville, the nearest urban area, rarely venture out to shows like this. Knoxvillians prefer the pseudo elite culture imported from Broadway and presented at the Tennessee Theater and the three stages of the Clarence Brown Theater. We are excellent evidence of that since we have indeed seen almost every production at all of those venues but, as I said, coming to Pigeon Forge only for the first time now.

Digging a little deeper, we learned that presenting high quality shows is more than a challenge in our region. Our host lamented that Pigeon Forge is surrounded by four of the poorest counties in the United States. Education lags along with poverty and finding the right mix of cost and quality is a constant problem for them.

Another aspect of the evening that intrigued me was the insistence that this “Opry” not resemble the Nashville institution with a similar name. Most of the shows are closer in style and quality to New York than Nashville. And that apparently is because that’s what the area wants. And so this enormous theater–larger by a factor of two than the largest auditorium at the U of Tennessee–fills with almost every show. Even on the lowest attendance night of the holiday season (Disney practically shuts down this week), there were over a thousand people in the theater. And even so, making it economically viable is difficult.

Another thought that crossed my mind was how we can travel so far and still wind up in the same place. I was a child venturing into one of the wealthiest enclaves in the world, Rockefeller Center, to see those Rockettes. But I came from the South Bronx, one of the poorest areas in the Northeast and that is where I returned after the show was over. I think my experience must be similar to those who go to Dollywood or the Pigeon Forge entertainments and then return to those four counties.

But there is one huge difference between my experience and theirs. While I was as poor as anyone in Appalachia during much of my youth, I attended the public schools of New York City. When the time came, I could go to one of the best high schools in the United States for free. I don’t know if there is a short term solution to the economic woes our hosts apprised us of. But I do know that there is a longer term solution: agree to fund education at every level from kindergarten through University. Pay a bit more in taxes so that the children of Appalachia can have the same advantages that I did. I have no doubt whatsoever that in a decade or two we could draw a very different picture of this beautiful region.