Time to remind ourselves about this chestnut (roasting on an open fire).

One of my dear friends on social media after peering at a photo I posted while at my daughter’s family exclaimed, “Is that a Hanukkah bush?!” Indeed it is, I replied, and why not?

A few facts. It can’t be denied that Jews of my parents’ generation saw “Christmas trees” as Christian and discouraged their use within their communities. While that can’t be denied, in fact, there is nothing I can think of that makes a Christmas tree Christian other than the sorts of ornaments one might hang on one–such a cross, or placing a Nativity scene somewhere in the display. The tree itself is just a tree, and almost certainly represented some form of Winter worship or expectations of Spring among the Pagan communities of northern Europe long before they were Christianized.

We can’t be exactly sure about when Jesus was born, but we can say that according Christian Scripture, it was not on Christmas. The correct date cannot be known without additional evidence appearing, but almost all of those who have written on the topic place the event either in the Fall or Spring. From a Jewish perspective, that would suggest either at the time of the Fall or Spring festivals. December 25 was not chosen until centuries after the lifetime of Jesus. A historian and religious skeptic such as myself would argue that this was important to take people’s minds off of a very popular Pagan celebration, namely Saturnalia.

Now, many of my Jewish friends are convinced that the date of Hanukkah is reliably the 25th of Kislev, roughly December. As always, it’s much more complicated than that. First of all, those Jews who would become the basis for modern Judaism despised the Hasmoneans. Far from “liberators” they saw this dynasty as the very embodiment of “Greek” civilization–the very culture against whom Judas Maccabeas supposedly fought! It appears that they invented the story of the oil which lasted for 8 days to replace a festival honoring the Maccabean kings which they had decreed to usurp the authority of Solomon who Scripture says celebrated the dedication of the first Temple with a week-long celebration. 1 Kings 8:66 describes this event and says that the people were dismissed on the eighth day. And so we get eight:

And on the 8th day, (Solomon) released the people and they praised the king and returned to their God glad and rejoicing in the all the good that the LORD had done for David his servant and for Israel his people.

I would suggest that the placement of this holiday in December was, just like their Christian contemporaries, a way to usurp the Pagan festivals common at the time of the year when the Sun mysteriously signals it’s triumph over Winter by lengthening it’s days. December 25th, by the way, is probably the date when most people could notice a change after the Winter Solstice.

Personally, I don’t see much danger of a return by either Jewish or Christian religious communities to Paganism, and therefore I don’t have much of a problem with either or both groups celebrating the return of the Sun by decorating a tree.

Now, in my family, we have to add another, important fact. Clara and Alexander’s dad is a renowned expert on trees. So much so that as I write this he has the position of Assistant Director of the National Forest Service for the region of the USA from Maine to the Mississippi river, north of the Ohio. So of course there is going to be a decorated Winter tree in their home!

Having said that, take a look at the ornament that tops this tree. Hint: it’s not a cross. But if you choose to have a cross on yours, good for you!

I hope all my Christian friends will have the most joyous of holidays, and if my Jewish friends want to steal the idea of a tree, nothing wrong with it! Merry Hanumas! 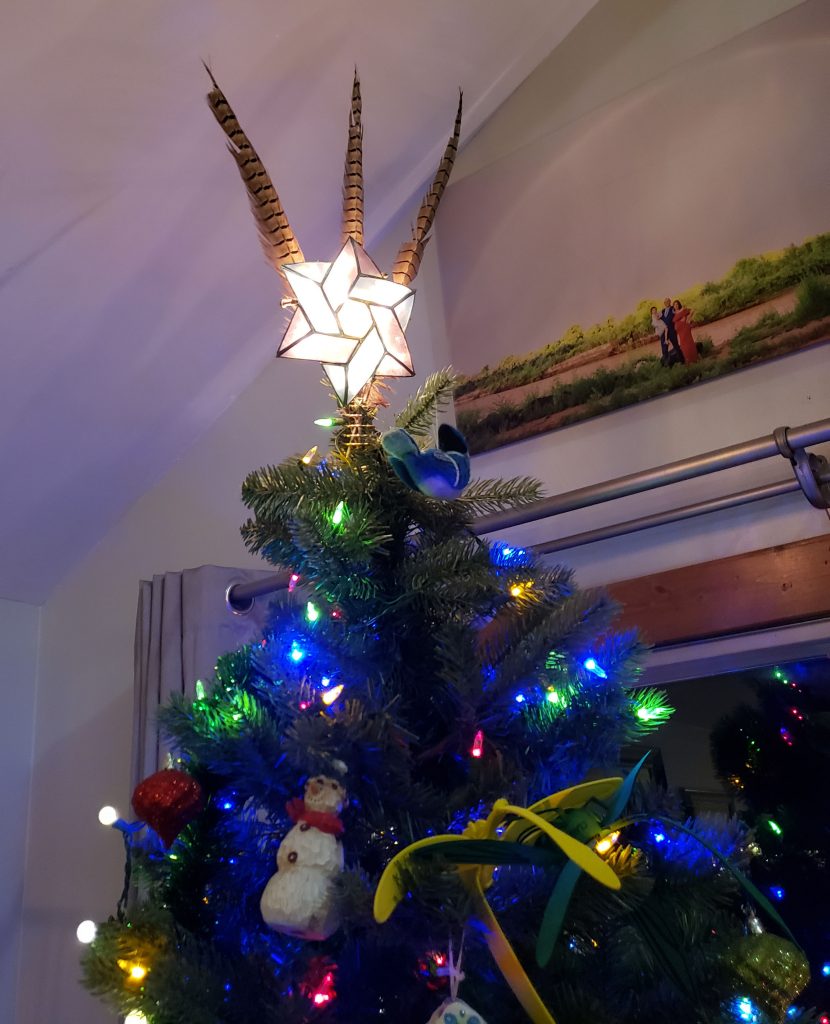