This story could be entitled “Waiting for the Blizzard” as the forecast for these here parts is a bit grim. But I’m getting ahead of myself…

Knoxville to the Big Easy

We began our cross country trip in our home town, Knoxville Tennessee and stayed overnight in Hoover, Alabama. Although a brief stopover, we discovered a very fine Chicago-style pizzaria called Tortugas. The next morning it was on to our first goal, the Big Easy. Turns out no one knows why New Orleans is called “The Big Easy” although many theories vie for the title. We checked into the J.W. Marriott hotel directly across Canal Street from the French Quarter, and it was easily one of the nicest hotels I’ve ever had the pleasure of visiting. 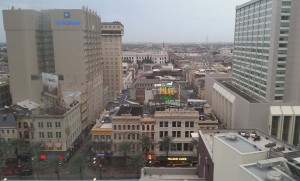 View of the French Quarter from the 14th floor

Of course it was everything you might expect of a big city hotel. Courteous and helpful staff, luxurious appointments in the room and unbelievably expensive parking requiring valet service. But we knew all that going into it so we just forgot about the money and enjoyed ourselves.

Our first mission in New Orleans was finding one my friends from my Berkeley era, Galen.

Galen and I took courses together at U-Cal in the mid-70s. Although he was not Jewish, he registered for and excelled in a Talmud course in the original languages. After graduating from Berkeley he went on to the Hebrew University of Jerusalem where he accomplished the almost Herculean task of obtaining a Ph.D. from the Bible Department. In those days, it was commonly held that Hebrew University was the last refuge of the German University. According to Galen, that’s the past–the school is more like others in the world now. After the 10 year-long process, Galen was hired as an instructor at Hebrew University, but was disappointed to learn that he would not be considered a good candidate for tenure track due to the lack of Israeli citizenship. He found a job at Tulane as a “Professor of Practice” which is approximately like the position I hold as a Lecturer at U-Tenn. Galen retired after his second term and now lives in the Treme where he composes music and posts liberally (so to speak) on Facebook. 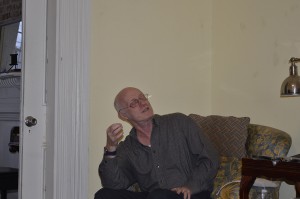 We enjoyed a most pleasant dinner at a fine restaurant called the Degas Cafe in a neighborhood (district) called Esplanade Ridge. The food, service, and atmosphere were all as good as it gets. 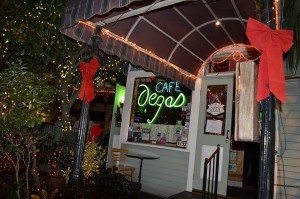 There was another reason we added New Orleans to our itinerary for this trip. I learned about a year ago that my cousin Marty lived there. I had last seen this cousin when he was drafted (I think in 1967). In those days he lived across the hall from me with a brother, father, grandmother (to me as well) and our aunt Esther. His mother, Fay, of blessed memory, had passed before I was born, and “Bubby” and Esther took care of the boys while dad Lou worked in the U.S. Post Office. Marty was the closest to me in age (but still about 8 years older), so I interacted with him the most. Marty married a local woman during his military service while stationed in Arkansas, Ceil, and they had a child named Patrick. For five decades I lost track of him. But we arranged to meet in New Orleans where they had settled. Patrick was home for the holiday, and so it was that I had a reunion with my cousin and met his son for the first time. And they met my wife for the first time. 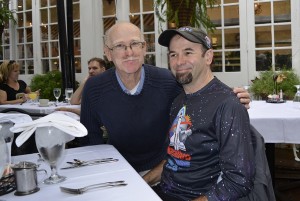 We met up at the Court of the Two Sisters in the French Quarter where we enjoyed a fabulous buffet style lunch. (A little “touristy” Galen pronounced, but just the right thing for our day!) When Marty arrived with Patrick, I recognized him instantly and we started to chat like we had seen each other the previous week. 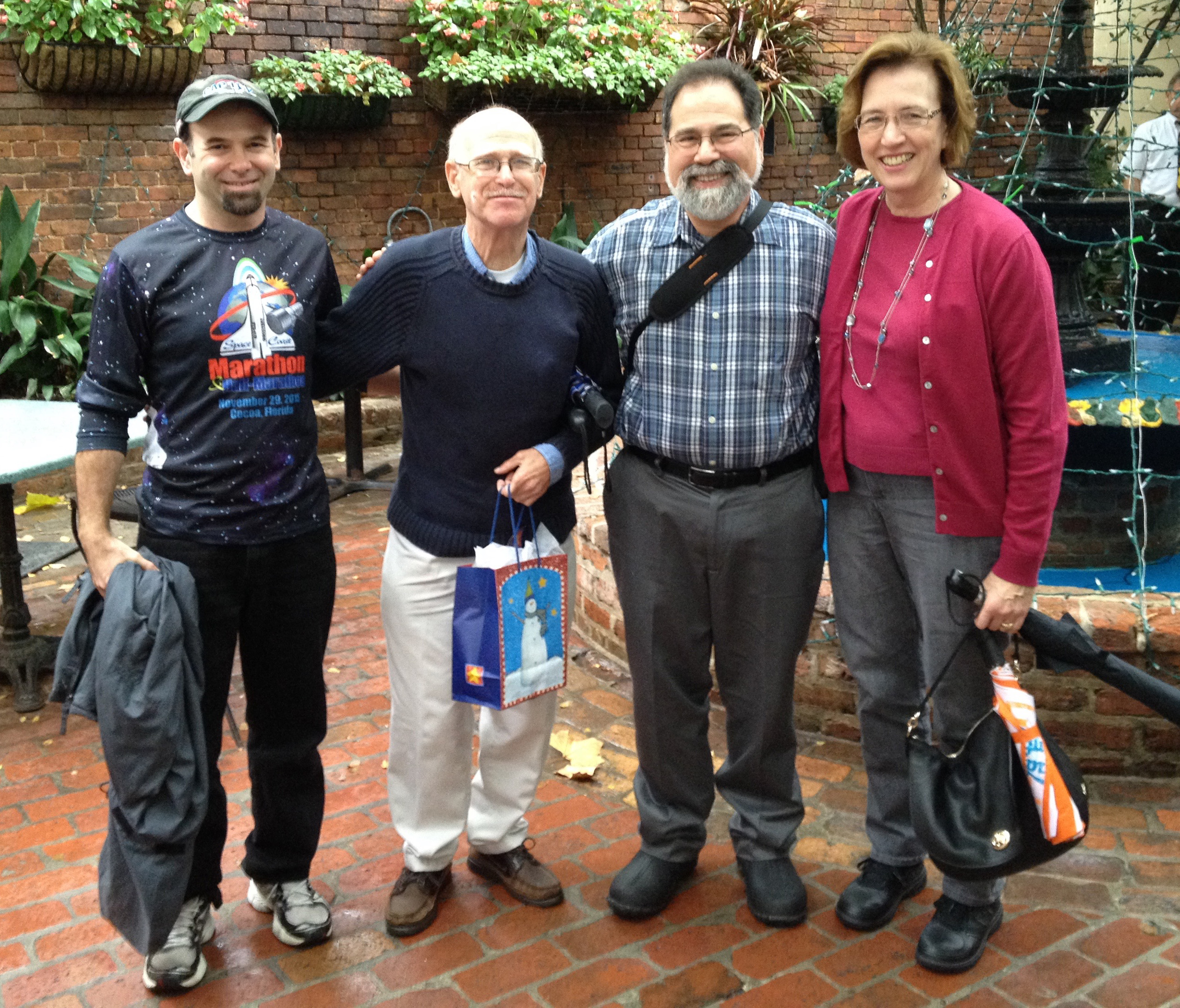 The decades melted away and I learned about his life and Patrick filled in some detail. I wish we could have visited longer, but perhaps we’ll get back soon. 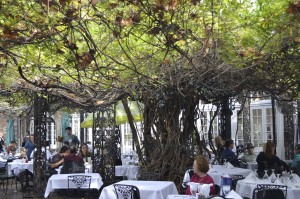 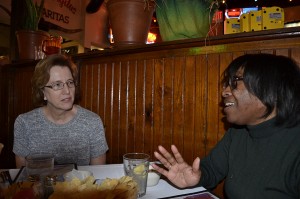 Stephanie making her point to Terri

From New Orleans we set out on a leisurely place to Clara’s home town of Albuquerque, New Mexico. Along the way we stopped for lunch in Shreveport where we met an old friend and colleague of mine from my days at CAEN, Stephanie and her brother-in-law Derrick. Lovely lunch at the Superior Bar and Grill, catching up with Stephanie and her lovely daughter Brelyn, and making Derrick’s acquaintance for the first time. 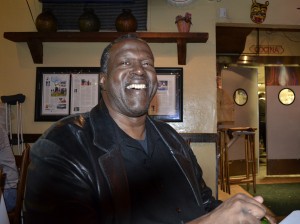 After overnighting near Fort Worth, we planned a stop at the Frontier Museum in Abilene (Texas–not to be confused with Abilene, Kansas). Although just a dot on the map, the museum is terrific. Lots of computer enhanced displays, genuine artifacts, nicely produced film features. For me the greatest pleasure was seeing how the curators treated native Americans with a combination of respect and the understanding that everyone in that era was engaged in a brutal struggle for existence. 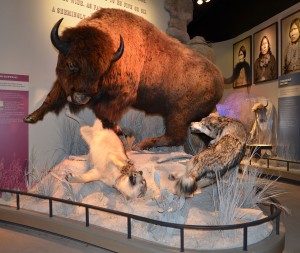 After the museum, an unexpected pleasure:

The Beehive Restaurant was just superb. I know few of you will likely ever pass through Abilene, but if you do, don’t miss this place!

Our next stop was Lubbock, Texas. The town name always stirs memories of a roommate I had in the first house I ever owned–in Oakland, California–who hailed from there. Her name was Terry Hicks and I’m sorry to say I’ve lost track of her. But Lubbock was directly on our route to Albuquerque, so we stopped there for the night and had just enough time to make it to the Buddy Holly museum. A small affair, but nicely done. 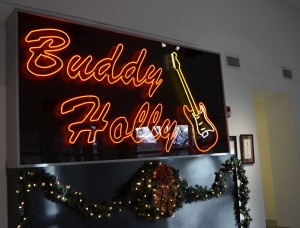 And at long last we arrived in Clara-land!

Clara chooses to live with her parents up on Sandia Mountain–about 6800 ft above sea level. You might say that Clara lives at the intersection of “No Outlet” and “Dead End”. 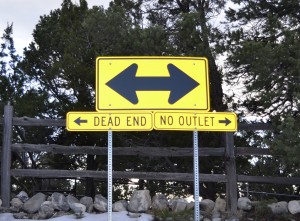 This is the view from Clara’s road. 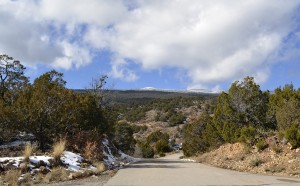 The view from Clara’s road 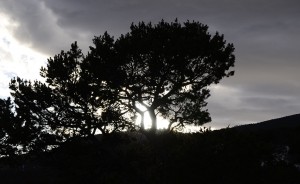 Our first night in Albuquerque we went to a very pleasant Asian themed restaurant called Jinja Bar and Bistro. Highly recommended! The second night, Karl and Sho fixed a wonderful meal for us. Karl prefers to serve meat that he has harvested from the wild, and on this occasion he prepared quail that he had caught. Sho added a lovely pasta salad. Terri is beaming over the arranged table: 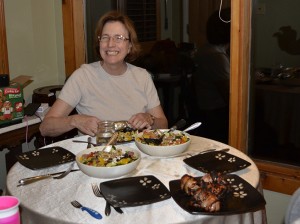 Terri is beaming over the arranged table

We met Karl’s friend Jerry at this meal, and Jerry couldn’t resist staying for a serving of quail even though his wife was preparing dinner near by. 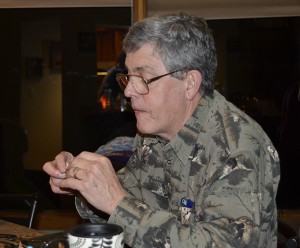 Jerry partaking in the feast

Clara was too busy finishing her meal to smile for the camera, but Sho and Karl try to make up for it. 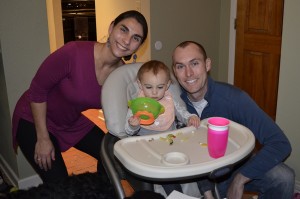 Clara intent on finishing her meal, with Sho and Karl

The blizzard I mentioned at the beginning of this story arrived on Saturday night, 12/26. Because of my knee, I was staying down the mountain in a hotel in Albuquerque. Terri and the kids remained up on the mountain. The storm intensified overnight and about a foot of snow accumulated on the mountain. The bigger problem was that “black ice” formed on i40 causing almost 200 serious accidents. As I write this late Sunday night, i40 is still closed. We’re hoping to reunite the family tomorrow so we can all go see Star Wars (Episode VII). In the meantime, Clara has ventured out into the snow, so we’ll end this vacation article with her. 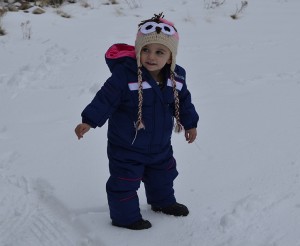 Update: The storm just grazed Albuquerque, but further south (towards the Mexico border) it caused massive problems including the destruction of some 35,000 cattle. It then marched east and flooded Oklahoma City and parts of Missouri finally burying parts of New England in several feet of snow. i40 between Albuquerque and Sandia Mountain remained closed for another day.

Despite all that, our winter vacation turned out very well. I was soon reunited with the rest of the family. We saw Star Wars in IMAX from the 3rd row (the furthest back seats still available when we arrived for a matinee!), saw the Albuquerque Zoo, ate in some more lovely restaurants, and then made the trip back to Knoxville in 2 days. Our one stop was in Ft. Smith Arkansas, which we discovered was the 2nd largest city in that state. The detour was pleasant enough and I certainly wouldn’t mind staying there again.

We’re back in Knoxville as I write this, and the semester will soon be occupying other of our thoughts. But we can’t wait to see our Clara again–hopefully this coming Passover.

1 thought on “Traveling to Clara, Hanukkamas 2015”