The core of this vacation was a return to Marquette for enough time to appreciate why we bought a home here 7 years ago. If anything, it is better than ever.

We contemplated taking advantage of the fact that we could actually fly from Knoxville to Marquette now that K.I. Sawyer has been transformed from a military base to a commercial airport, but that would have deprived us of the chance to see friends along the way, not to mention the incomparable experience of traversing the Mackinac  Bridge.

On the way up we stopped in Traverse City to do some business (meeting some wonderful U-Tennessee alumni) and seeing the ancestral home of our wonderful son-in-law. Traverse City is nestled at the bottom of the Grand Traverse Bay with the million dollar views and (unfortunately) real estate prices to match. We enjoyed a fabulous breakfast with John and his partner Margo at a small coffee shop located inside a mental institution that is being converted to housing and shops. 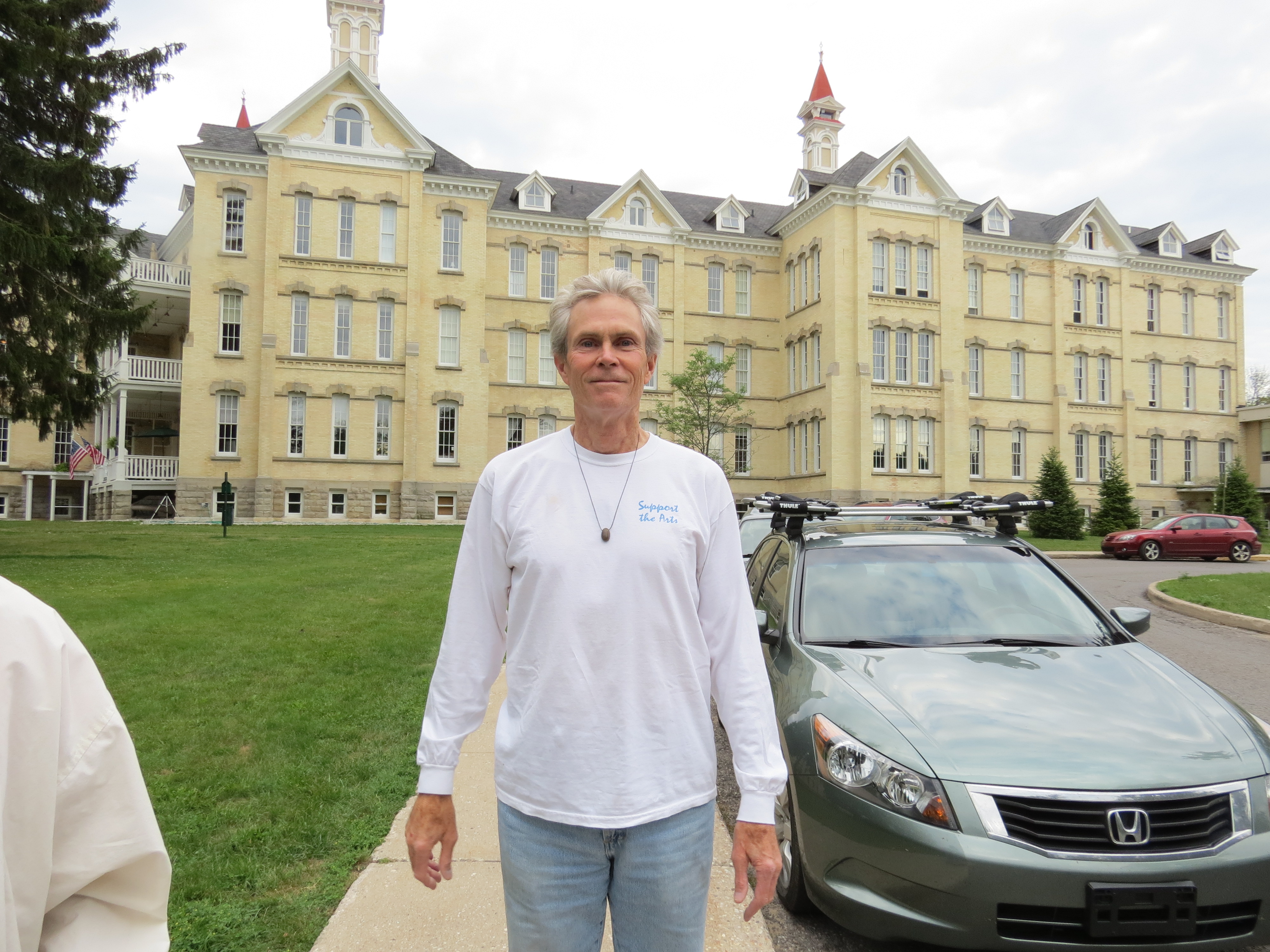 That is, of course, a somewhat bittersweet experience for me. Those of you who know my history with “Momma” know that it is a concern for me that just when we seem to be getting an idea of the proper way to care for people with profound mental disabilities, we are removing the option to allow them to live on beautiful grounds. The term “community housing” is too often a euphemism for cheap, under-supervised “board and care” homes or so-called “adult foster care” homes. Why couldn’t these lovely grounds have been turned into apartments for the people the institution was actually designed for? But don’t get me started…

In any case, the company was terrific, the food superb, and the ambiance delightful.

The Upper of the Lower

After breakfast, we resumed our road trip passing through Charlevoix and Petoskey, and on to that fantastic bridge. The waters of Lake Huron glistened blue and green on our right, Lake Michigan on our left as we crossed from the LowerP to the U.P. Almost as soon as we made the left turn to US 2, the population dropped off and we were in the entirely different environment, both geologically and geographically of YooperLand.

We stopped for lunch at Muldoon’s Pasties in Muniseng, right on the shores of Lake Superior. Muldoon’s is justifiably renowned as the best place to enjoy these Cornish meat pies. We took our time savoring the food and the view and then it was on to the metropolis of the Yoop, Marquette. 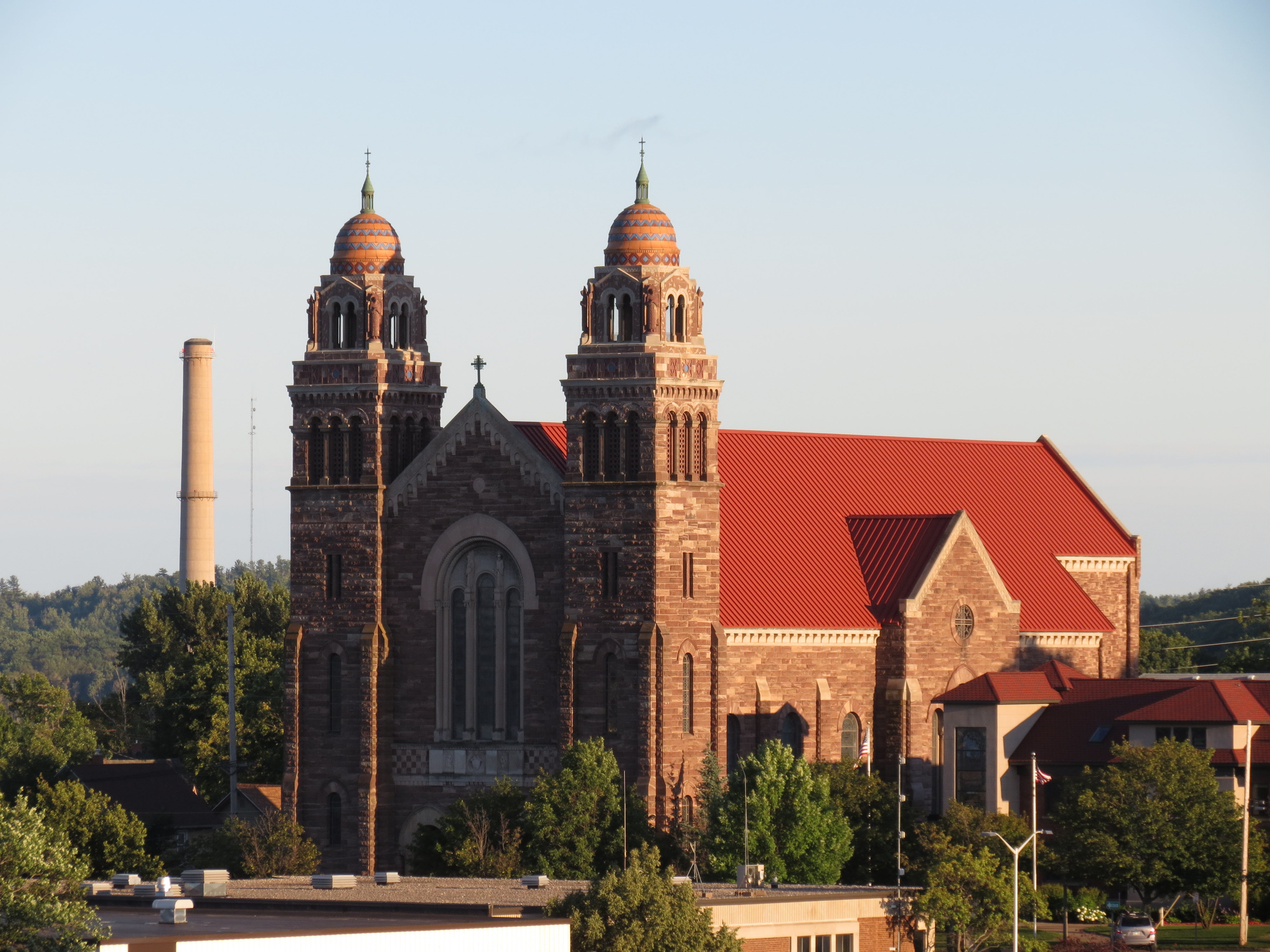 St. Peter Cathedral, One of Marquette’s Most Beautiful Landmarks

Marquette is the biggest city in the U.P. with a population of about 21,000, but the county boasts a total closer to 70,000. Although it lost a major player when K.I. Sawyer air base closed, Marquette still benefits from hosting Northern Michigan University, the U.P.’s medical center, the governmental services for the entire U.P., a still valuable shipping center for Great Lakes traffic, and more recently, interest in reopening mineral exploitation. The last aspect has pumped some much needed cash into the economy and we were delighted to see the evidence of new prosperity everywhere in town. 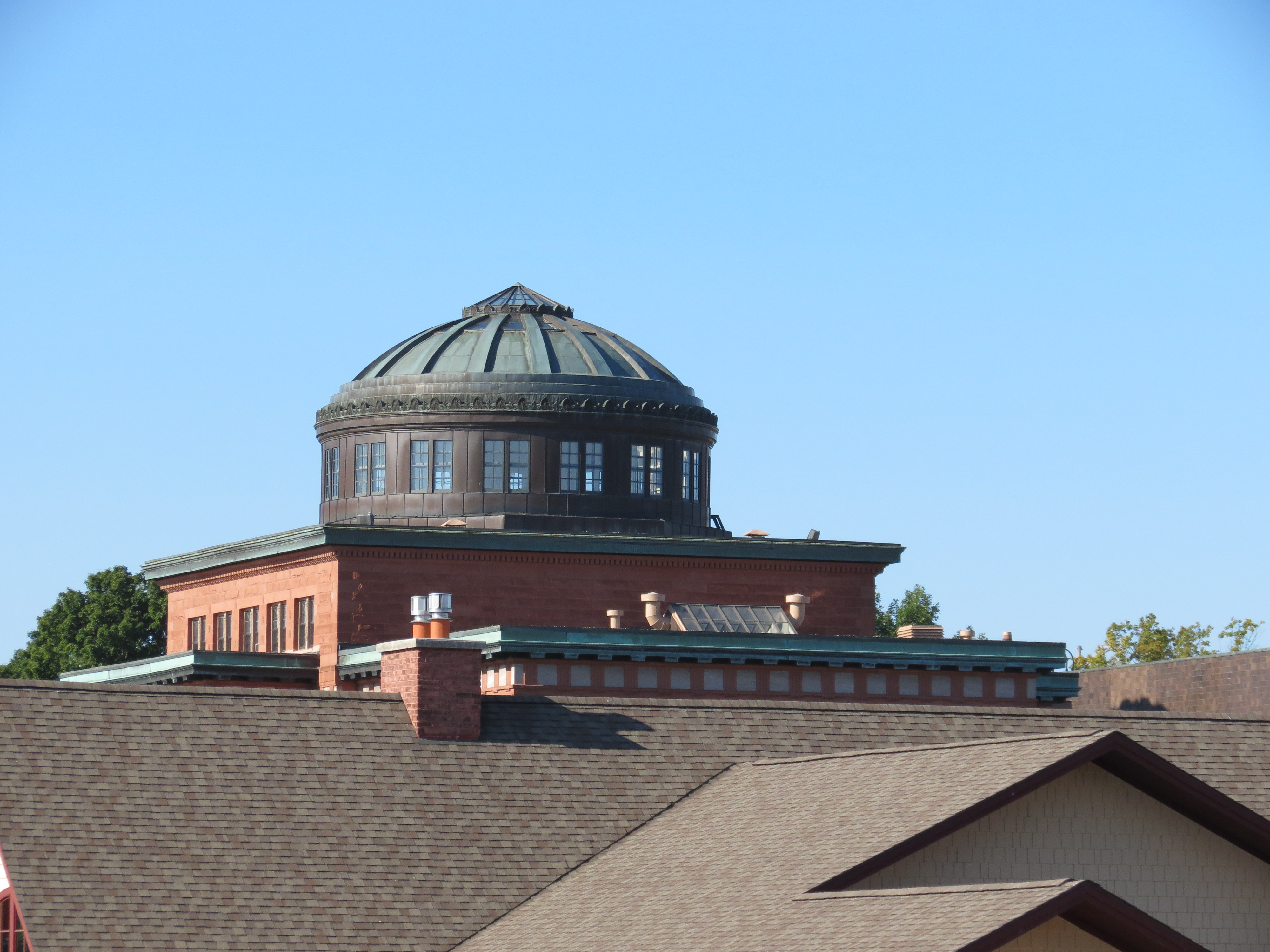 Part of the Marquette skyline

A few years ago some major publications woke up and noticed the great advantages of this community and Marquette suddenly found itself declared one of the 10 best places to retire in the U.S. We hope to spend at least part of our retirement years here.

On arrival at our hotel, we immediately rediscovered the pleasure of turning on a faucet and receiving a steady stream of cold, delicious water. No need for bottled or refrigerated water here!

For all its small size, Marquette has an amazing number of very good restaurants. Now Culvers isn’t one of these, but it is one of our U.P. traditions to eat one meal at this chain which comes out of Wisconsin and has better-than-average food for this sort of place. And, of course, some really good soft-ice-cream specialties. Diet be damned on vacation!

First thing in the morning, it was our first trip back to my favorite bagel store, “Third Street Bagels.” Now, I have to sadly report that these are not really bagels. They aren’t boiled before they are baked and so, like a chain store bagel not to be mentioned here, they are more like rolls with doughnut holes than a true bagel. But no matter, I love them anyway! They are large enough to enjoy with two eggs, they are nicely flavored with the usual variety of bagel seasonings, and it’s just a great place to sit, surf the net, and enjoy great coffee and plentiful good-tasting food. The service, as everywhere in Marquette, is cheerfully provided by NMU coeds who seem to populate every eatery here even when school is not in session.

Marquette’s Version of a NY Deli 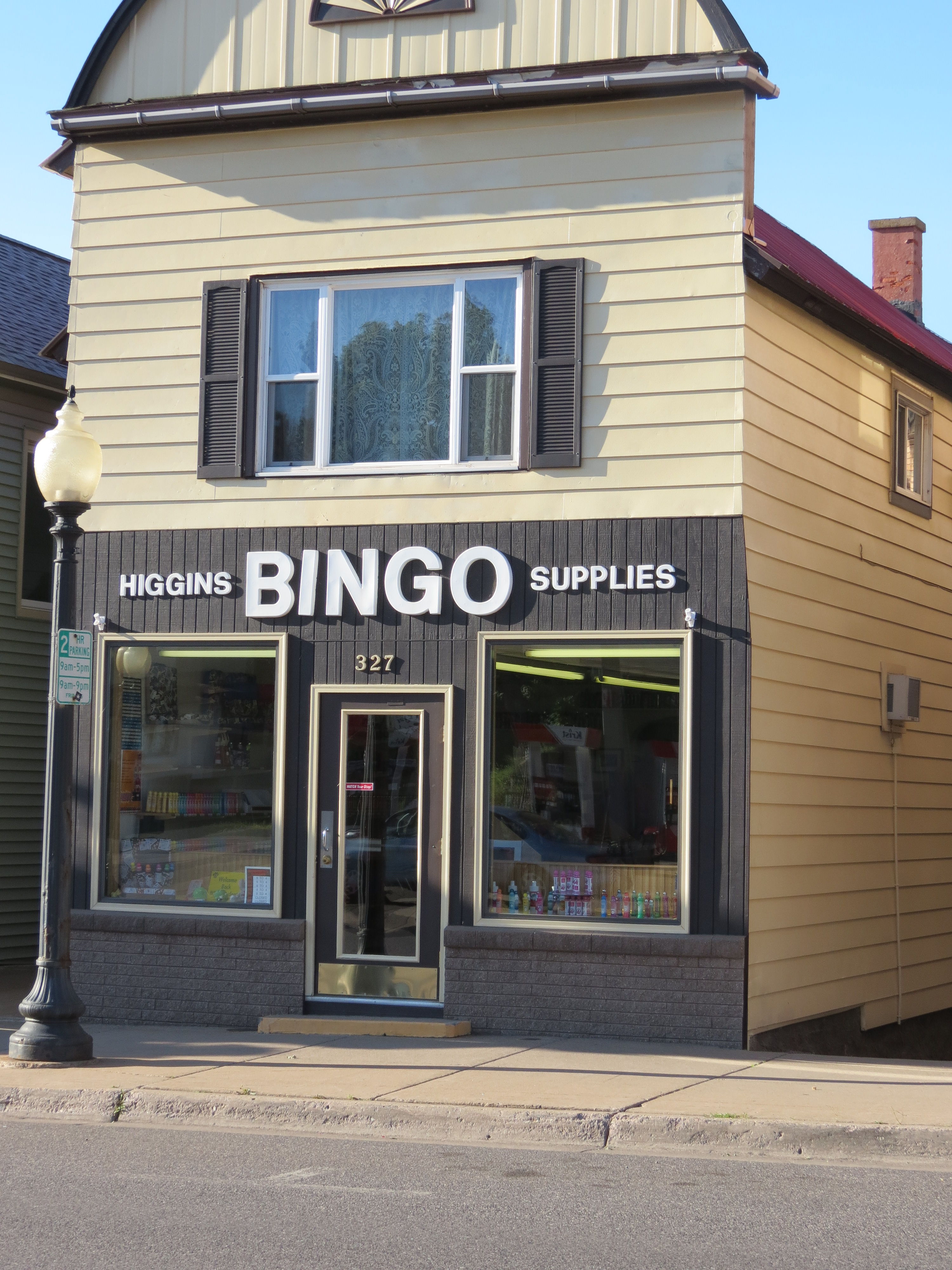 What’s a town without bingo supplies?

After church bingo and viewing the cathedral, a sacred tattoo is in order!

Although I probably should have skipped lunch (calorie-wise) I couldn’t resist heading to the NY Deli for a pastrami sandwich. This place was originally opened as the NY Deli and Italian Place by long-time U.P. resident Don Curto, but alas, nothing is forever and Mr. Curto decided to retire which resulted in the loss of the great location right by the Lake. One of his staff members felt that the community deserved to keep the NY Deli (there are plenty of places that serve decent Italian food throughout the UP), so he set up a replacement NY Deli a bit further down the main drag, but alas, further from the Lake.

They still fly the pastrami in from Brooklyn, and despite that, the sandwiches are all reasonably priced. The soups (including a decent chicken soup with matzoh ball) are all home made from scratch, and it remains a delightful and unexpected way to enjoy lunch in Marquette.

I’m not sure why (given the natural beauty readily available here) but we usually like to catch up on whatever is playing in the movies, so we spent a pleasant but mindless couple of hours at the multiplex seeing a buddy-cop movie with the twist that the “buddies” were the female pair of Sandra Bullock and Melissa McCarthy (“The Heat”).

We declared Tuesday “Houghton Day” and so it was off to our old Keeweenaw Peninsula haunts. The reason we originally “found” the UP was that Michigan Tech University runs a terrific summer program and we eventually sent both our kids to those programs. Shoshana took photography and long-distance bicycling, Ephy, as I recall, took anything that allowed him to blow stuff up. 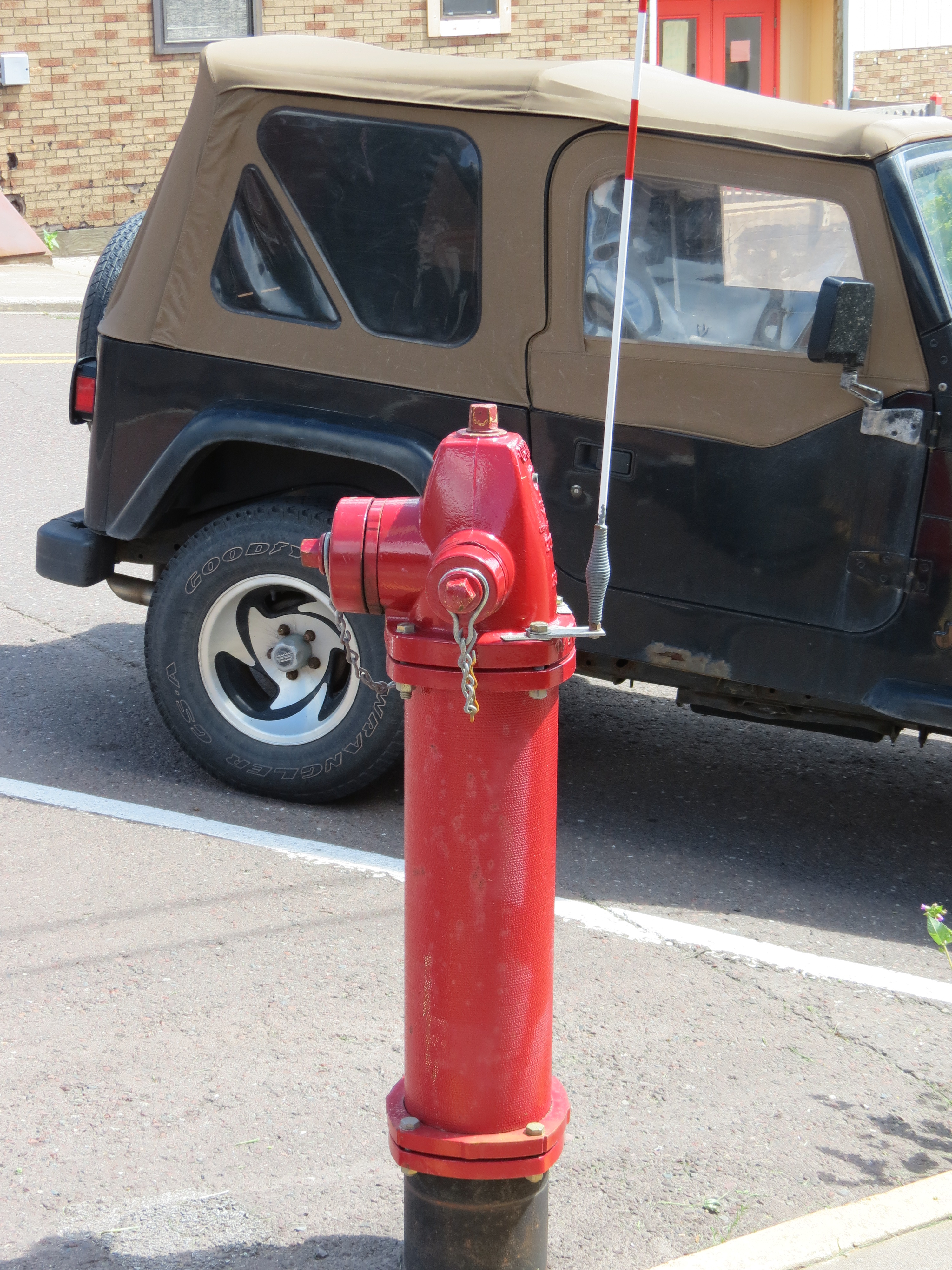 The snow gets THIS high!

When we first started these vacations, we usually stayed in Houghton, but we quickly discovered that as beautiful as Houghton is, there’s a lot more to do in Marquette. Nevertheless, we allocate a day to Houghton whenever we can. And it is still as beautiful as ever! 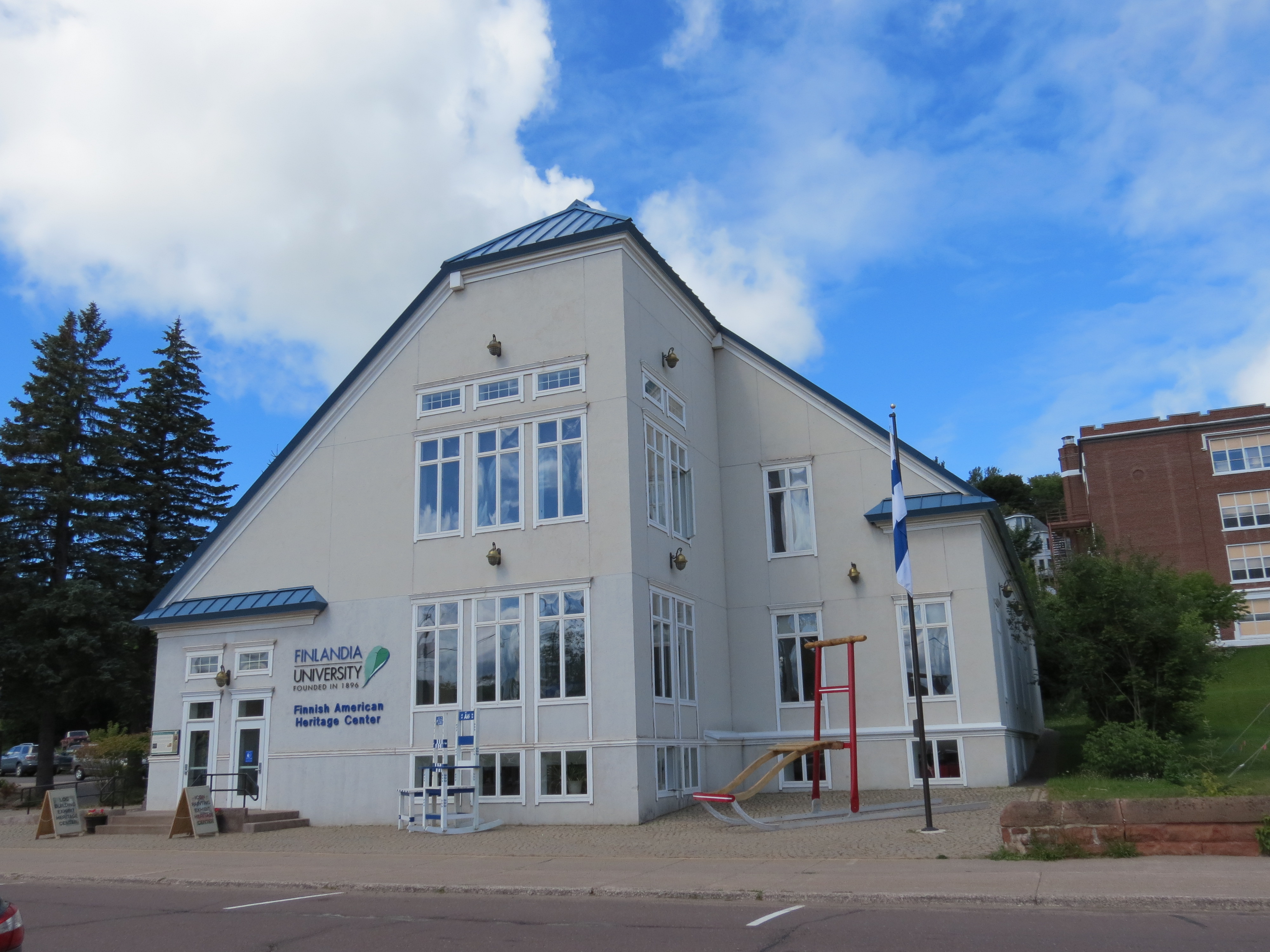 We  spent some time strolling around Houghton’s sister city, Hancock, which meant crossing the still-functioning drawbridge across the gorgeous canal. We dined at our old favorite, The Library, which features huge picture windows overlooking the canal. With the sun lowering, it was time for the 90 minute trip back to Marquette.

Wednesday featured a total of ten miles of walking around Marquette, mostly along the lake shore. We eventually got to “South Beach” (its real name!) which will give Miami visitors quite a chuckle. Unfortunately, the weather has been unusually cold for a Marquette summer, so the number of beach-goers was pretty minimal. Believe it or not, despite the chilly waters of the Lake, this is usually a popular–and crowded spot. Not this year. 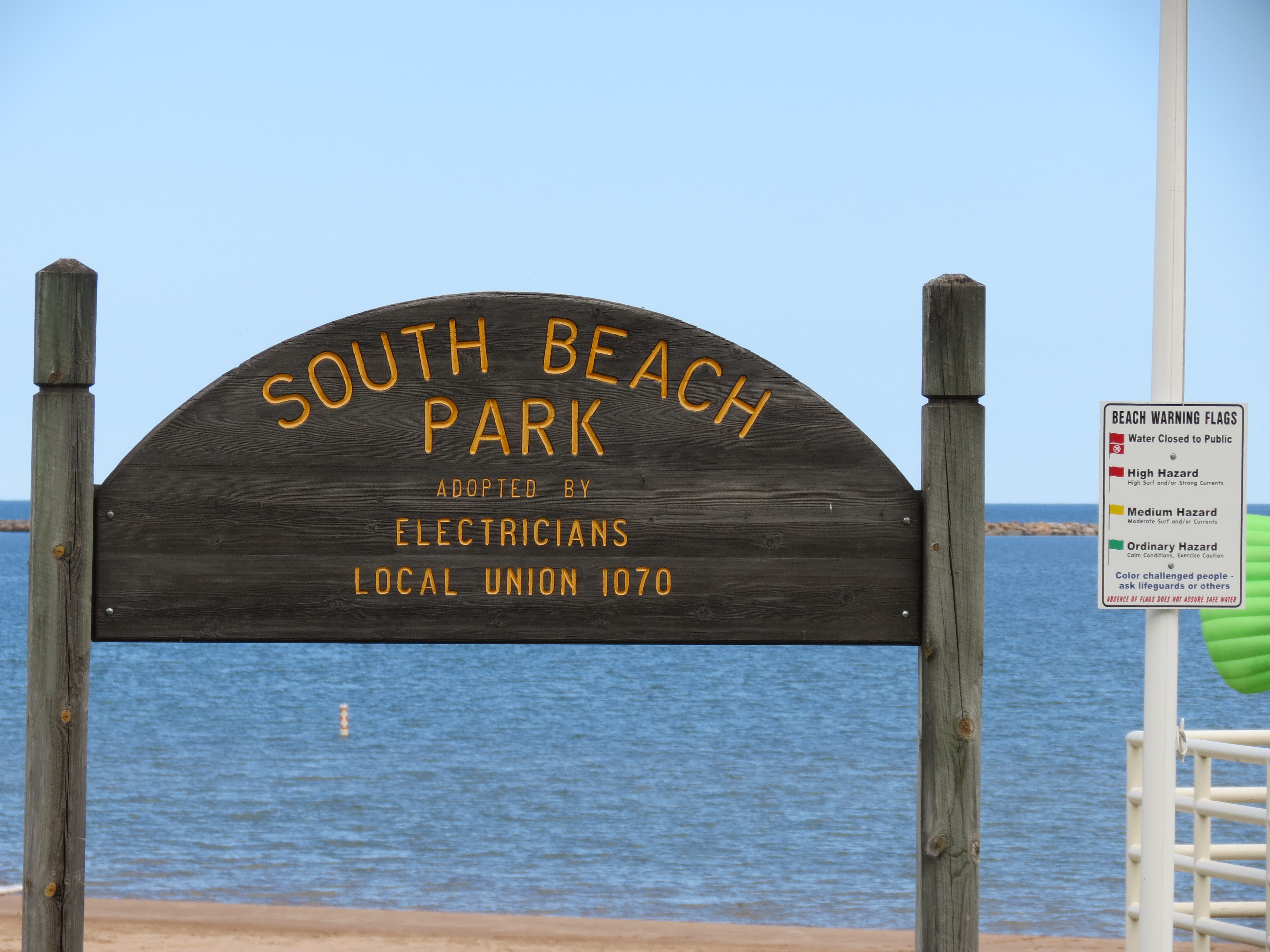 Marquette has enjoyed a great community theater (cleverly named the Lake Superior Theater) and we attend whatever happens to be playing when we are here. This time it was a revue format of past productions. I was amazed at the vocal quality of the performers and the acting was just fine. The theater is celebrating 15 years and I’m glad they are still making a go of it. They deserve a lot better attendance (Marquette, are you listening?). 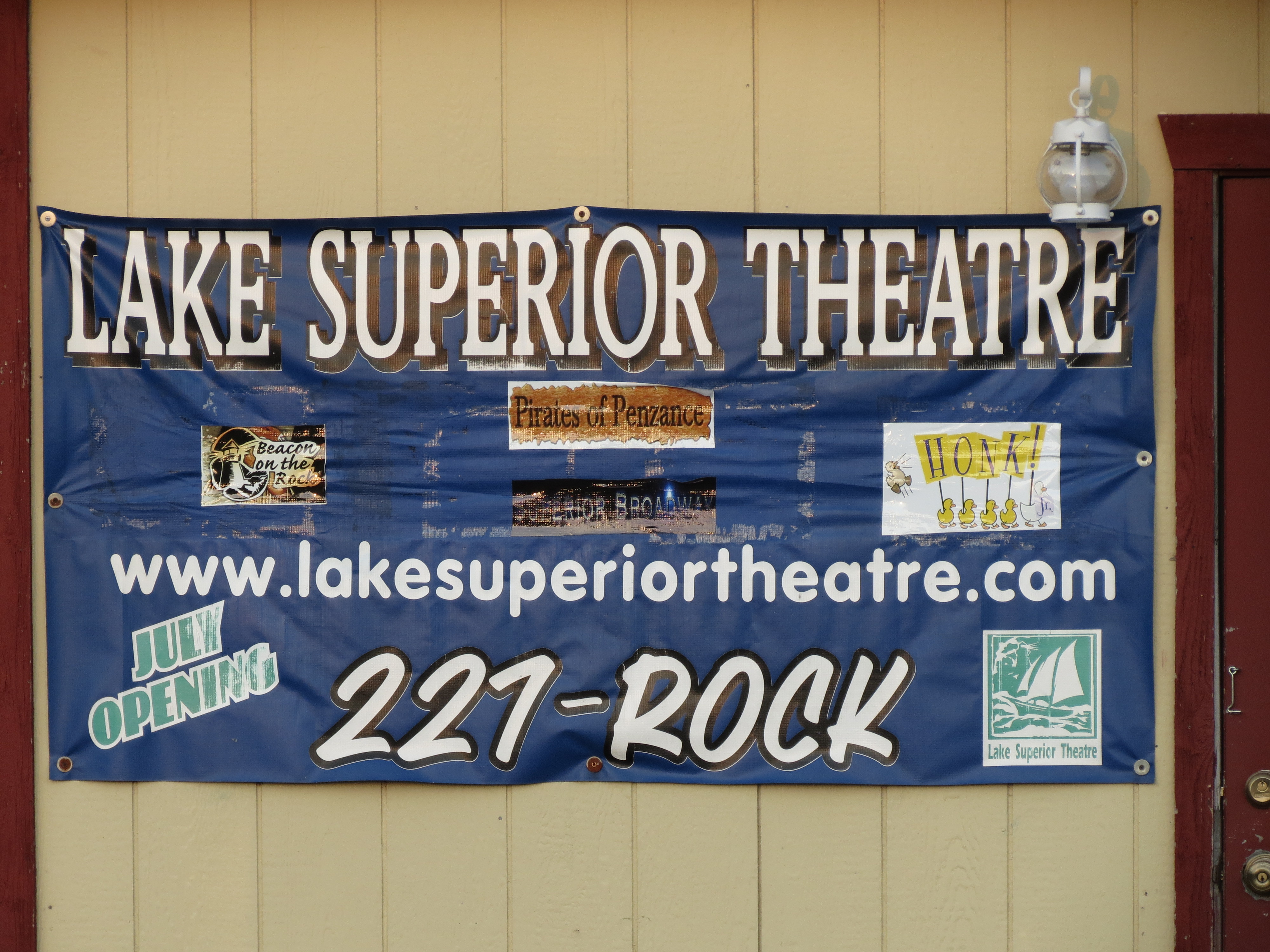 Lagniappe: A Taste of the Gulf on the Shores of Lake Superior

Wednesday’s dinner was at Marquette’s very own New Orleans restaurant called Lagniappe. Now before you sneer at the notion, I have eaten at some fine places in New Orleans, and while I wouldn’t say Lagniappe is at the top end of scale, it is quite respectable. Terri is a connoisseur of hush puppies, and she insists that there are no finer anywhere. The chef trained at some of the best New Orleans establishments and visits there regularly to pick up supplies and keep up with the trends. Although excluded for reasons of Jewish sensitivity, I can’t say much about the preparation of alligator, not to mention the various oyster and crawfish offerings, I can tell you that the place has great food, great service, and last night even very good live Cajun-style music. 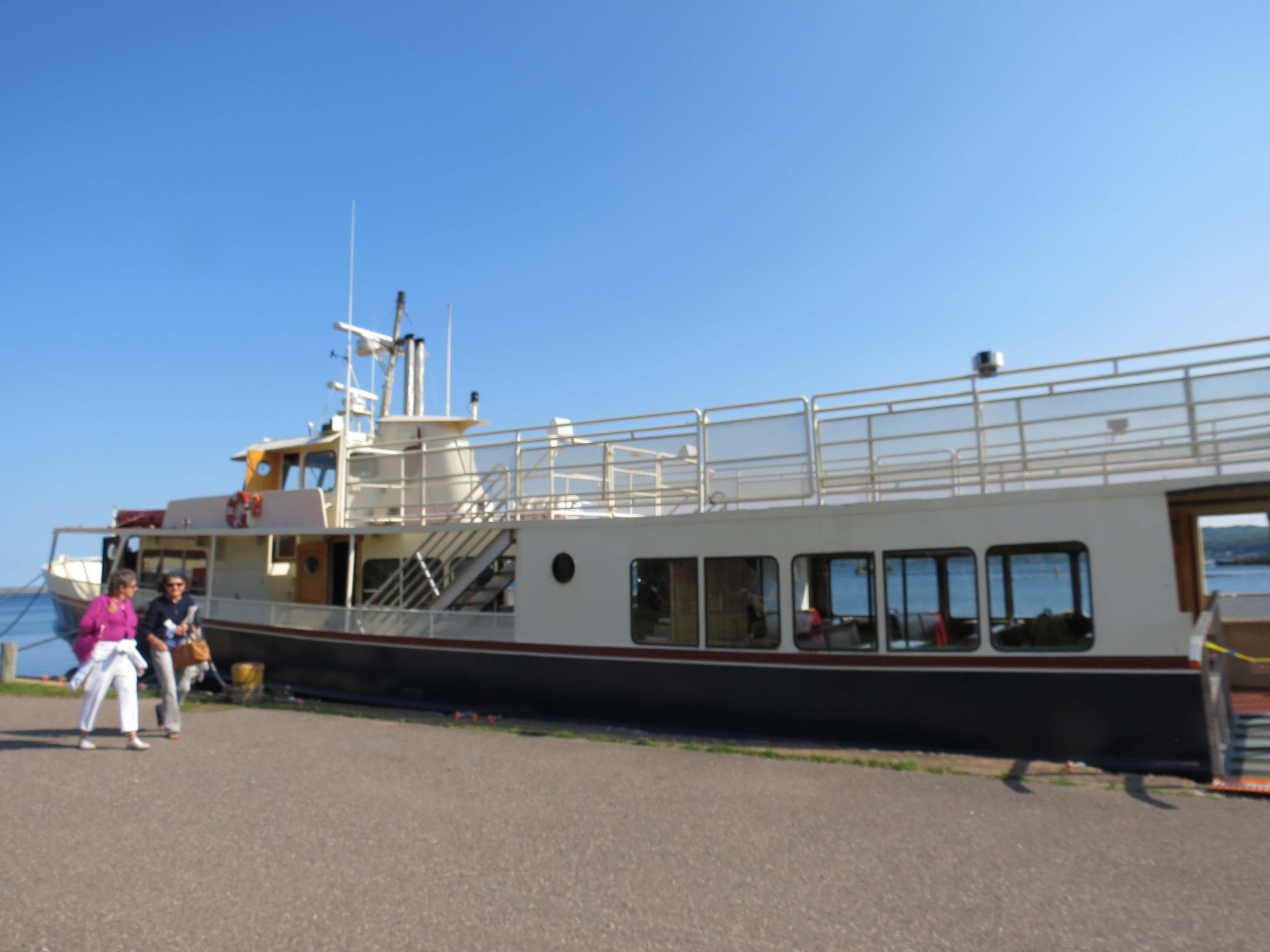 The Isle Royale III has been demoted to bay cruises, but we still remember traveling on her to Isle Royale!

Thursday, we tried a new (to us) breakfast place–Donckers. Excellent food, enormous portions. The restaurant is the 2nd floor of the local candy shop. The area where we sat had large windows that provided a crystal clear view of the Lake. Soon we’ll be walking again, and at 5:30pm, for our last evening in Marquette this trip we’ll take a bit of a cruise around the Lake shore. The ship seems to be the same one we took a few years ago to Isle Royale, and we’re told there will be snacks and music provided as well. 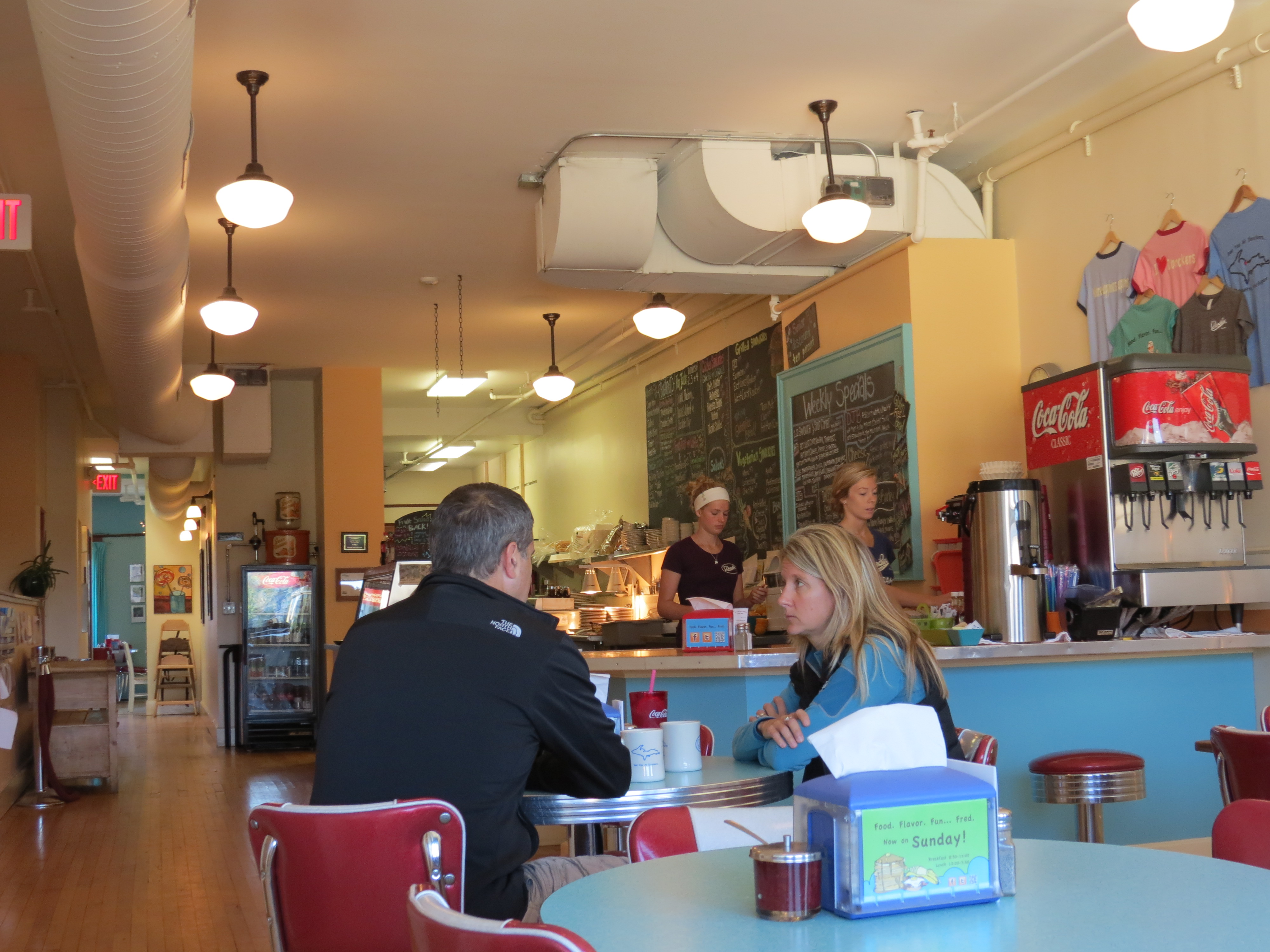 Tomorrow, alas, we’ll have to bid farewell to this gem of the north. Last stop before Knoxville will be Lansing where we will overnight with old friends. I’m feeling guilty because we have so many friends in Lansing that we could and should be visiting, but we simply have to get back to Knoxville, so perhaps another year. 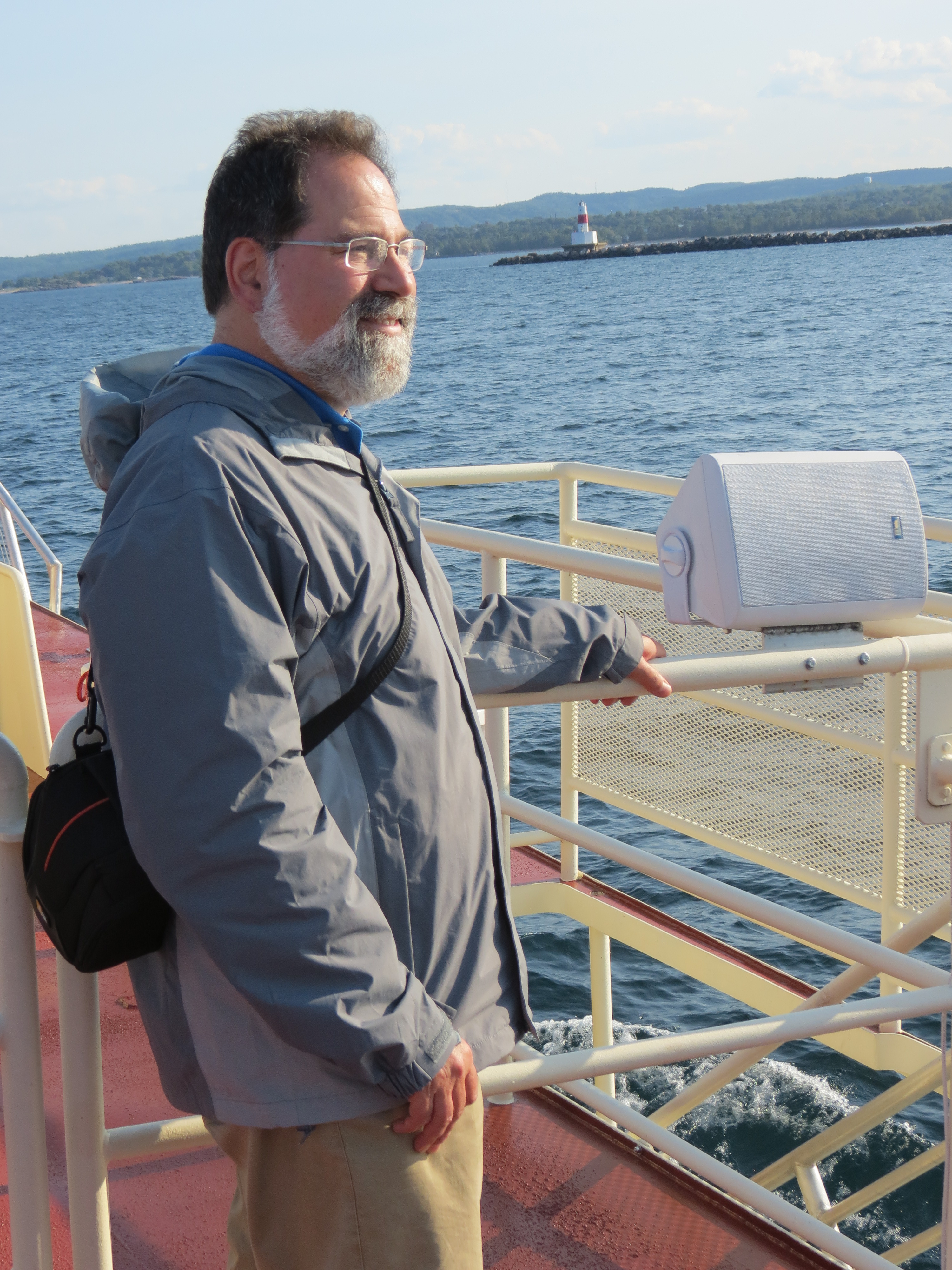 Me, as captured by Terri.