Nina de Amor arrived in our home in a rather haphazard fashion. The story begins with the end of another. Our family dog Caleb passed away rather unexpectedly in the Summer of 2003. Both of our kids were away from home at the time. I sat down at the dinner table and couldn’t help but notice that Terri was unusually quiet throughout. As we picked up the dishes, she said to me, “I think the dog is dead.” I raised my eyebrows at this and replied, “You think?” “Doesn’t a Ph.D. biology allow a little more certainty in a matter such as this?!” She said, “OK, the dog is dead.” I should mention that Caleb had epilepsy and Terri had already literally raised him from the dead about a half dozen times, so his passing at the age of 7 may have been unexpected at that moment, but not surprising nevertheless. But that left us with the decision of how to replace him, because we knew that our then 12 year old son would insist on having a dog.

The added complication was that Terri’s allergies were getting worse, and she was specifically allergic to the dog-dander of fluffy dogs and dogs and oily coats of dogs like Labrador Retrievers–a breed she was quite fond of. Since I worked in IT, my immediate course was to Google it. What came up was a “dog calculator.” In this scheme, you enter the three most important things to you about the dog you want to acquire, and the computer will tell you your optimal breeds. I placed “hypo-allergenic” at the top of our list, and the computer spat out three breeds: Wheatland Terrier, Poodle, and at the very top of the list, Spanish Water Dog. I had never heard of the Spanish Water Dog, but if you’re reading this you’ve probably heard of the Portuguese Water Dog because that was breed adopted by the Obamas after they moved into the White House. As I later learned, the Portuguese Water Dog was bred for size from the SWD. The SWD is likely the originator of this line because its 35 lb to 45 lb range seems to be consistent with the origin of the dog species. The SWD was not recognized by the American Kennel Club, but was sanctioned by several other international dog clubs. Obviously Spain, but also in England and Scandinavia. Terri and I aren’t “dog snobs” or in need of purebred pets, but in this case it was important because we were seeking a dog that met the hypo-allergenic criteria, and that is a characteristic of breed.

Acting on these suggestions I started my search for places where we might be able to find either a Wheatland Terrier or a Poodle, but came up empty-handed. Dog breeders explained to me that the summer was not a time when dogs generally produced puppies, and perhaps I would have better luck in the Fall. Striking out on these breeds, I scanned for Spanish Water Dogs. There weren’t many breeders, but there were a few in Ontario not far from where we lived in Michigan so I called them first–no luck. Same story as with the others. I was about to give up when I noticed a Web site for the “Spanish Water Dog Association of America.” That turned out to be a bit of hoax–it was really the Web site of a family that had gotten into the business, but I was happy to give it a try. Sure enough, they had a brand new litter which the proprietor explained had come about “accidentally”–a second breeding in the same season. And he noted that because the puppies were unanticipated, they were also unreserved, so we could have the pick of the litter.

We gave him a deposit and awaited Ephy’s return from summer camp, just a couple of days away. As it happened, Ephy was pretty discombobulated as he emerged from the camp bus–the trip took hours longer than it was supposed to. As soon as we picked him up we said, don’t get settled, we’re on our way to Tennessee to pick up a puppy. He was not a happy camper (so to speak) as we drove ten hours to Knoxville, at several points accusing us of having murdered his dog. But somehow we got there in one piece. And that’s how I landed in Knoxville for the first time in my life! Little did we know what the future had in store.

Nina’s birth location was a country home in the Tri-Cities area of East Tennessee, about a 90 minute drive from Knoxville. We arose early and drove that last 90 minutes. When we got to Nina’s home, before we reached the door, it opened and a man dressed in sort of Amish-like clothing emerged with a musket or some sort of old rifle cradled in his arm. We then noticed a woman dressed in this fashion. And we thought to ourselves, whoa, what have we gotten into! 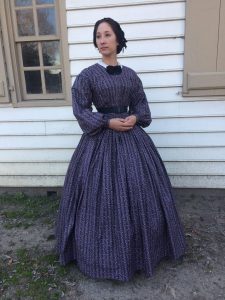 As it turned out, they were both quite modern people of our own period–but that day they were participating in a historical recreation of the early 1800s, hence the garb, musket, etc. When they saw us they waved us over and after that it was all dogs and puppies.

They did a demonstration of their adult dogs’ diving ability in their pond, and it was indeed amazing. They threw objects that sank to the bottom of the pond (which was quite deep) and dogs emerged with them every time. One of the traits of the Spanish Water Dog is that the fur in their paws fills in densely and allows them to use their paws as flippers to drag themselves deep under water. At the time a Spanish Water Dog held some sort of Guinness type record for deepest dive by a dog. For all I know that record still stands.

Every breeder we spoke to was concerned to let us know that these dogs are work dogs and as such are happiest when they have things to do. They don’t necessarily make good pets if one’s idea of a pet is an animal that lies around the house most of the day. The breeder was relieved to hear that we lived in the country on 11 acres and that Terri was experienced with farms and farm animals. So we passed that test. After giving us some paperwork assuring us of the pedigree, we plopped our eight-week old brownish red puppy into the back seat with Ephy and we began the 11 hour drive back to Ann Arbor.

Nina was everything the Spanish Water Dog sites claimed. She learned with amazing quickness and had a broad skill set. She was a fierce guard dog and protected her family with passion. Throw a stick and Nina would beat any other dog to it. When we added a poodle to the family (Nina was then about 8 years old), Nina made sure the poodle knew who was boss, and then showed her ropes of coping with the LoveLees.

Spanish Water Dogs live an average of 11 or 12 years, but Nina showed no signs of slowing down until she hit 14. She went partially and then almost completely deaf which meant she could no longer hear knocks at the door–and she was visibly disturbed at having people show up without her personal scrutiny. We tried to move her downstairs so she wouldn’t need to navigate the staircase, but she had nothing of that. On her last day with us, she still dutifully climbed the stairs to her bedroom. And that last day she lay down and could move no more. Our wonderful vet helped her out of this world without further pain and I don’t think I will ever stop missing her. 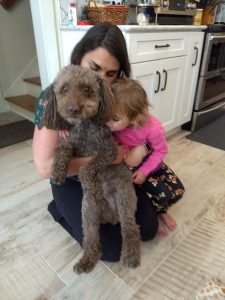