For me, as a student and teacher of what is often termed “Jewish History” the most startling observation from this week’s readings was the number and variety of commentators who raised the Holocaust in one way or another to illustrate important points about the role of memory in History (and vice versa). While I fully understand that our major objective is the use of these ideas and techniques to elucidate the history of the medieval Mediterranean world, I believe I have sufficient cause to spend some time on a topic related to the Holocaust.

I would like to start a conversation about a piece of visual art. The piece is a small sculpture created by a long-time, recently deceased Knoxville resident, Mr. Arnold Schwarzbart. On Sunday, the Knoxville Jewish Community will be inaugurating a new wing of their facility, an art gallery named in honor of Schwarzbart.

Arnold Schwarzbart was a survivor of the Holocaust (using the broad definition of the term since he was not confined to a concentration camp, but rather was among those who fled the Ukraine for Russia). He arrived in Knoxville shortly after the end of the war knowing no English. He learned the language, succeeded at earning a degree in architecture, and spent about twenty years as a successful architect before changing careers. Something led him to the world of art based on Jewish themes and he spent the rest of his life creating works large and small in every imaginable material: clay, wood, metal and stone, paper and ink. 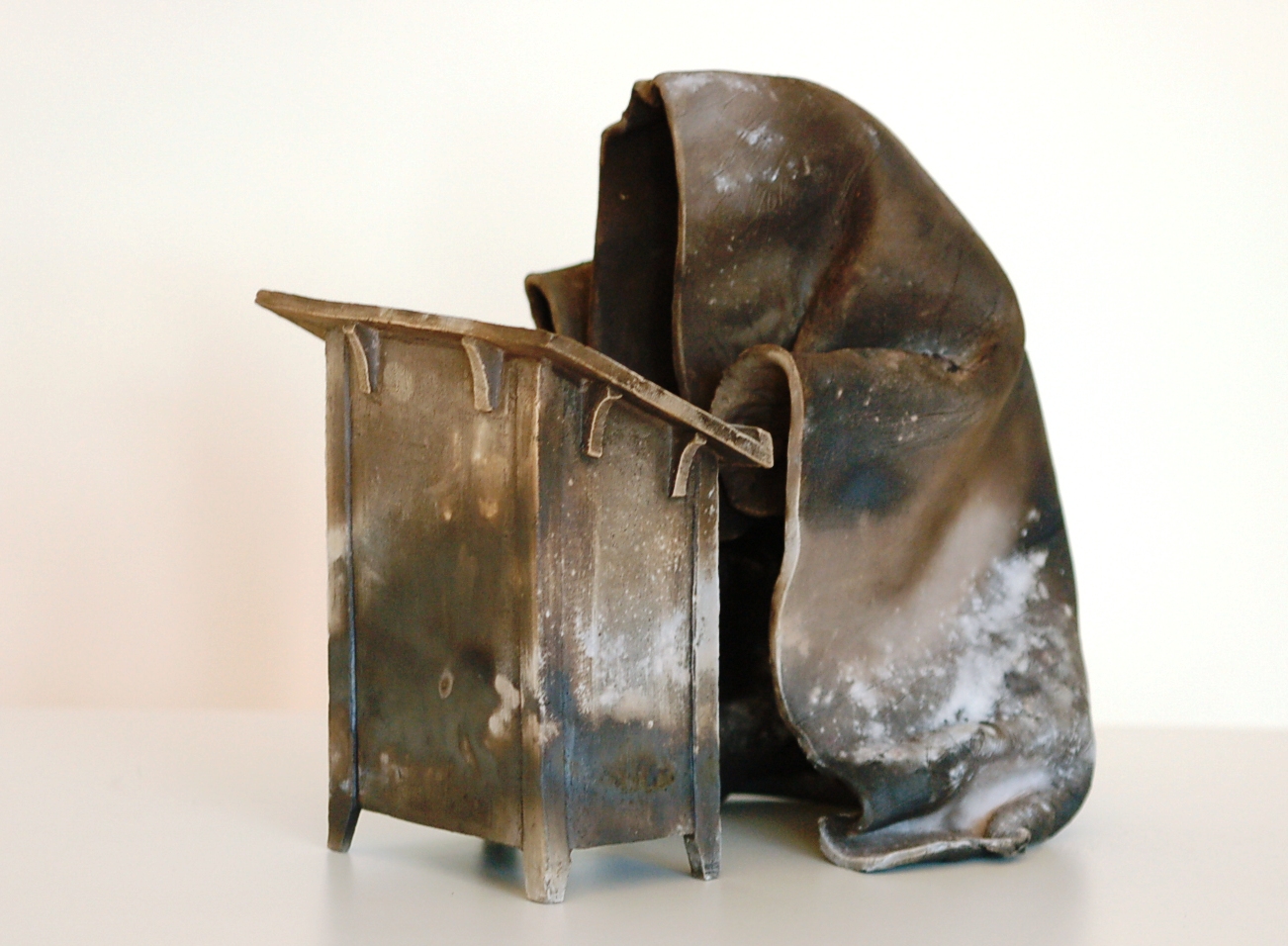 At first glance, this piece might look interesting or quaint to most people. At this point in time, most American Jews probably would lack any sense of its meaning. But Arnold was born and bred in the culture of the East European shtetl (Jewish community or ghetto), and to anyone who understands that culture, the figure is instantly knowable and arresting. It is the figure of a man (and this was a male role in that culture) studying a holy book. We know this because he is wrapped in a large talit, or prayer shawl, which covers his head and a large part of his body. He is standing at a tall table or lectern upon which a book would have been laid. In many shtetl synagogues, the man would have been joined by other men standing around the lectern studying with him.

Even more arresting is the fact that the man is not actually in the sculpture at all. Like a ghost, his physical existence is suggested only by the shape the of the shawl. When pressed, Arnold explained that the reason he showed the man in this way is because the man under the shawl had been turned into ashes. He no longer walked the earth.

When do we remember? I can’t say when Arnold Schwarzbart remembered a figure such as this. Perhaps he never saw the person himself–after all, he was but a child when he was taken to the camps. The first time I can recall seeing this was not, oddly enough, during my youth in the Jewish part of the Bronx. Rather, it was when I was already done with college and had headed off to Israel for a year abroad, a gap year before I would start graduate school.

I was in a place called the “WUJS Institute” located at that time in Arad, some 7 km from the Dead Sea. The institute employed a man who had arrived in Israel from his native Poland. One of the small number who had somehow escaped the Holocaust and subsequently the Communist attempt to erase ethnic memory. He was a deeply pious man who worked hard all day and then at its end retreated to the synagogue where he studied. When I saw Schwarzbart’s figure, it was this man (whose name I never learned) who I saw.

The figure is probably evocative for a number of reasons to different people who may be members of different groups, but Eastern European Jews could not escape its authorial intent, and not even the women who, after all, had much less experience with study in the synagogue. I wonder how many people would pick up on the notion of the absence of a figure under the canopy.

When I think of the world of medieval Mediterranean society, I wonder how many Jews might have recognized this “Shtender.” I have no idea when such an image might have become commonplace nor in which locales. I suspect strongly that Maimonides, who towers over any notion of medieval Mediterranean Judaism would not have recognized it at all. Indeed, what symbols would he have recognized? In fact, despite the burgeoning of Jewish representational art in modern times, there is little that I can think of images symbolic of Judaism that would have been used in that area in those times. For Maimonides and those Jews acculturated in Islamic lands, there might have been a reluctance to adopt such symbolism owing to Islamic prohibitions on imagery. But even in such Christian lands as Italy and Byzantium, I can think of little in the way of symbolic Judaism. When the Jews began to fill books with illustrations, my understanding is that they used Christian artists and art forms to accomplish their goals.

Music is also crucial to the preservation of culture and aids in memory. Here again, Jews seemed to have followed rather than led. The Jewish music of northern Europe followed the modalities of the Gregorian Chant, while the Jews of Islamic countries sounded for all the world like a muezzin or a qari.

I must leave this topic for the moment as I have simply run out of time, but I look forward to revisiting it and elaborating on it as such time permits.

Arnold’s family was from Tarnopol, Ukraine, but he was born in Russia where his mother with her father got to during the war.)  After the war, the family moved to Vienna, where they lived from about 1946 until leaving for Knoxville in 1951. Arnold was 9 when they arrived here. I have photos of him on the ship coming over, and found the ship online. It had been a troop carrier and was converted to bringing refugees to the US. They came in through New Orleans. He practiced architecture from 1969 until 1981, but never gave up his license, finally retiring it.