A friend sent me this scan of a news article that you may find amusing as I did: 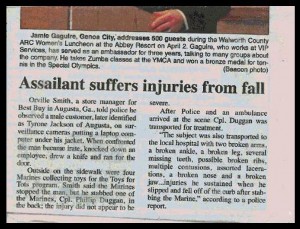 Marines get their man...or do they

After a chuckle or two I had a queasy sense that both I and my correspondent had been had by an Internet hoax. Here’s what gave me pause. The newspaper is not readily identifiable. The reporter is not identifiable. While the injured marine is named, the assailant is not identified. Usually things go the opposite way–the assailant is named and the victim is left unidentified. And no matter how justified the attack on the assailant may seem from the way this story is written, generally speaking the authorities have to at least pretend that they are investigating the injuries sustained by the alleged assailant.

It didn’t take much more than a Google to get close enough to the truth to satisfy me. This particular story has been making the rounds for about 2 years. It appears that there really was a crime and some marines did figure in the aftermath. As far as I can determine, the marines did not attack the assailant and he arrived at jail with no significant injuries. I’d be interested to know if the marines actually did subdue him–when you think about it, that would be the more heroic act.

The information that seemed to be the best of about this incident is at Snopes.com: