In my life I have been fortunate to have had close encounters of the musical kind with people imbued with immense musical sensibility and talent. In the early Spring of 1971, I was part of a student effort at the University of Wisconsin (Madison) to discover “future alternatives for America.” This Symposium was a direct result of the loss of a student’s life when a group of anti-war activists set off a bomb in the University’s Sterling Hall, home to the Army Math Research Center.

Each of us on the steering committee were charged with inviting speakers who could address the theme. My dear friend Shelley Falik chose to invite Pete Seeger, and to the astonishment of many of us, Pete accepted.

In order to avoid problems with his record label, Pete’s appearance was labelled “Pete Seeger Speaks” and the nothing in the description suggested that he would be giving a concert. But no one was fooled by that.

The night before the concert arrived and Pete Seeger arrived (in my fuzzy recollection by bus carrying his guitar and banjo). At some point, Shelley picked him up in his beat up jalopy and brought him to his student dive of a house where his girl friend and Symposium helper had made a pot of beans. The rest of us came with the simple offerings of students in those “counter culture” days. Pete pronounced the meal as good as any he could recall.

I don’t remember where he spent the night, but the next day at around 10am, Shelley and I were on a makeshift stage with him at the University of Wisconsin Stock Pavilion which could hold around 2,000 people. It was full. Pete Seeger “spoke” for about two hours.  It was broadcast by UW’s public radio station and I have a recording of that event but no idea whether I can legally post it or not. Perhaps some day.

All this came rushing back to mind yesterday when I had another close encounter with musical greatness. A few days ago my friend Mary Linda Schwartzbart noted in her Facebook page that David Broza’s new film would be screened at our Scruffy City Arts Festival here in Knoxville. Scruff City is a rather odd place–part bar, part performance venue. It sits on Knxoxville’s Market Square in a building dating to about 1900. These days, some enterprising and artistic minded folk have purchased it and use if for things like the Scruffy City Arts Festival.

Imagining that there would be a mob scene immediately prior to the event, Terri and I went over there the day before to buy our tickets. For those of you who do not know, David Broza is one of Israel’s most famous musical artists, a celebrity who can fill stadiums. As I bought the tickets, the manager told me that David Broza would be at the event and might perform a few songs after the movie.

As the event was getting under way, Terri headed off on a brief errand and I handed the ticket taker my stub–and I as I did so I glanced back. Standing right next me, close enough that I could have tapped him on the shoulder, was David Broza. Since I couldn’t actually think of anything to say to him, I gawked for a brief minute and then headed for a seat inside. When Terri joined me I said, I’m pretty sure David Broza is here.

The movie is called David Broza: East Jerusalem/West Jerusalem. It is a small study in the ways that music can enlighten people and contribute to peace. A wonderful surprise for the Knoxville crowd is the presence in the movie of Steve Earle. In this film he could pass for a Hassid. 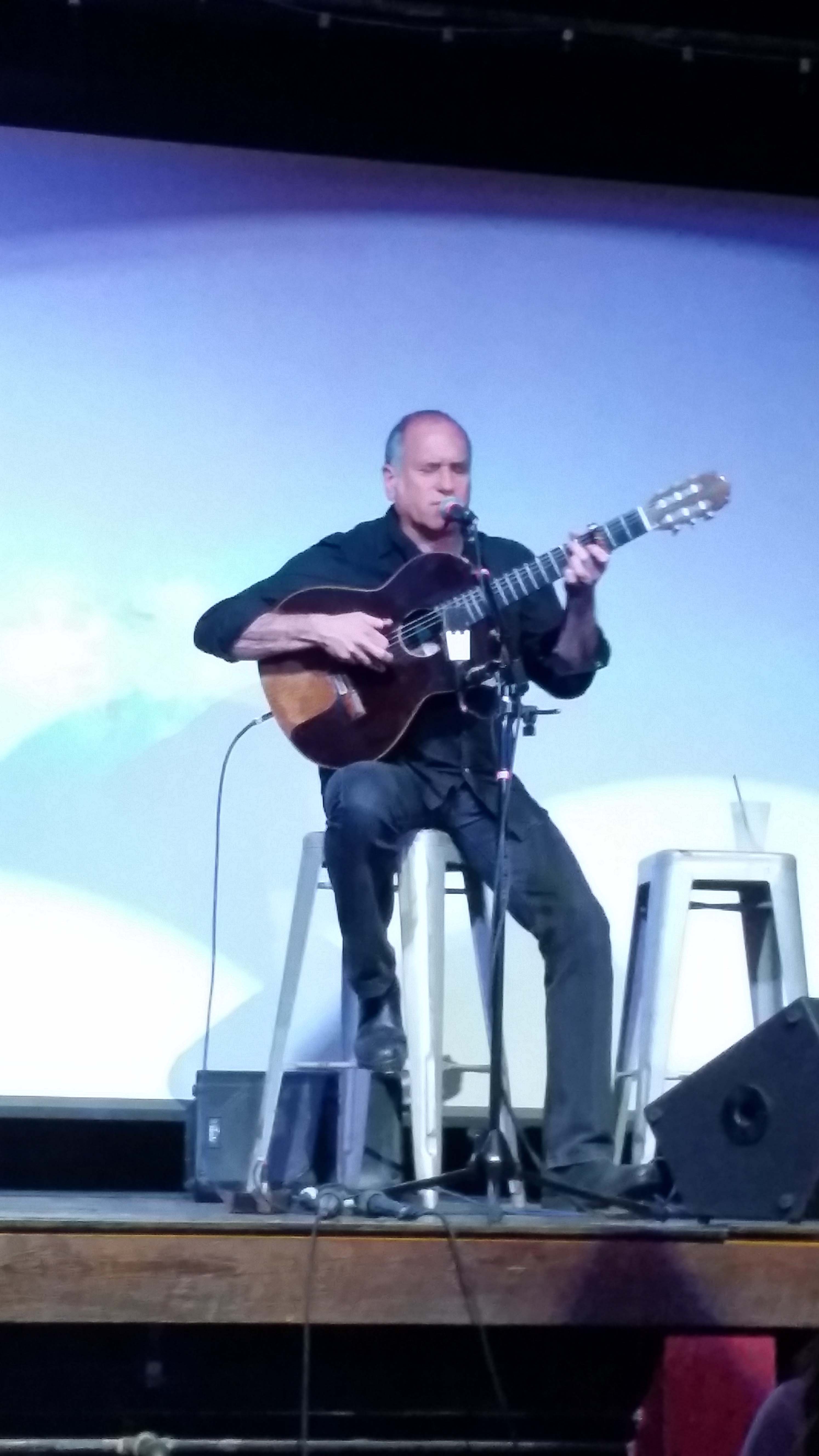 For reasons I can’t imagine, no one seems to have informed the Jewish community of Knoxville that this would be happening, so the audience consisted of Mary Linda’s friends and the usual suspects who turn up for every musical event in Knoxville–which is a wonderful, motley crew. Fortunately that meant enough people to mostly fill the small auditorium, and the crowd made up for its small size in vocal enthusiasm. Knoxville’s Appalachian residents welcomed David Broza into the fold. They clearly appreciated the film, and even more the songs that Broza played at its conclusion. Those songs included two wonderful pieces from the film: Jerusalem and my personal favorite, The Lion’s Den. He also played a song inspired by the music of the Mughrab and concluded with his most famous tune called Yiyeh Tov, a Hebrew song whose title means something like “It will turn out OK.”