Terri and I had no trouble arriving in Jerusalem in time for the plans of the day. We took a Sheirut (shared taxi) to the Tel Aviv Central Bus Station, and then another Sheirut to Jerusalem. We wanted to take the Jerusalem circle tour (a bus ride around the city with narration), but I managed to miss the Jerusalem Central Bus Station stop thinking that it would be the last stop (it wasn’t) on the Sheirut route. So at 10:30 we found ourselves on Latin Partriarchate Rd in the Old City. We wound our way to the Jaffa Gate and discovered that we could hop on the Circle Tour bus there, so we did. The bus itself is a bit of a disappointment. Slightly shabby with truly minimalist and stupid narration (surprising number of errors in the historical reporting), but you are traveling through Jerusalem, so it was worth the small price.

We arrived at the Central Bus Station where we were told that there would be a break until 1:30pm, so Terri and I wound up with our second day in a row of eating lunch in a Central Bus Station. This time I had the local equivalent of a potato knish. Very filling and tasty. After lunch, we returned to the bus where we found the bus driver trying a variety of methods to resurrect the computer that controlled the dumb narration. After 15 minutes of this he told us that we’d have to wait for a new bus and finally at 2:15pm we were back on the road with a bus that had a canvas top–actually much more comfortable than our first bus. Terri and I got seats on the top level right at the front, so we had a magnificent 180 degree view of Jerusalem as we ascended to Mount Scopus and down past the Mount of Olives to the Old City. At 3:30pm we were back at the Jaffa Gate. This time we took the traditional walk down David Street to the Street of the Chain, and a quick jog over to the Western Wall Plaza.

Here I was astonished at the changes since my last visit. Before the renovation of the Jewish Quarter, it seemed more open with vast views of the Wall and the top of the Temple Mount. I wanted to show Terri the western wall tunnels, but it turned out you now need to make reservations to see this, so that will need to wait for another day.

From the Wall we wandered over to the entrance to the archaeological park. For the second day in a row we had to decide against entering a museum because we had arrived too late in the day. We will definitely be going back at a more reasonable hour. From there we headed through the Dung Gate and had a view of the City of David dig. We re-entered the old city and made our way through the new Jewish Quarter. A yeshiva student tied a red ribbon around my wrist. I let him do this thinking I might actually be able to engage him in some conversation. This turned out to be futile, so off came the ribbon. I also avoided the appeal for “charity” as well as a few dozen other beggars. Our travels back took us to the excavation of the Cardo (the east-west thoroughfare of Roman Jerusalem). And we were delighted to see near there an excavation that revealed some material dating as early as 7th century BCE.

As the sun set we departed the Old City and walked along Jaffa Road. The road is in quite a state as they seem to be installing a light-rail set of tracks down the middle of the street. Before long we arrived at Ben Yehuda Street and I was in for quite a shock. The last time I was in Jerusalem, this was a bustling street. It’s still busting, but now it’s a pedestrian mall! There were people everywhere, shops, expensive restaurants and much street life. Up the mall to King David Street and I saw that my once-beloved felafel stands were no more. But Terri and I dined in a lovely little Italian restaurant. She had pasta with Tuna, I also had the pasta, but with roasted vegetables and pine nuts in a light olive oil sauce.

Sated with food, we took a cab to the Sheirut stand, back to Tel Aviv (with a delay for a massive traffic jam) and then the sheirut back to our neighborhood.

More time for the museum would have made this is a great day, but as it is, we are learning to cope.

Well, our first full day of activity in Israel was pretty much a bust. Interesting, but hard not to say it was all a bit ridiculous.

The initial idea was pretty simple. According to Frommer’s Israel (2008 edition, the most recent we could find), the Tourist Office is located at 7 Mendele Street. I thought that we could get maps, tour info and bus schedules and the like there, so we would make that our first stop of the day. So rather than waste a lot of the day, we took a cab to Mendele Street and arrived in good time. Unfortunately, the Tourist Office was no longer located there.

So we went to the hotel next door figuring that they would know to where the office had moved. Indeed, they not only told us that the office had moved near the Orchid Hotel, they provided us with a map to the location. It was a pretty easy walk, so off we went to find the new place. We got to the Orchid Hotel (and according to our new map, we should have hit the Tourist Office before we got to the Orchid), but no luck–no Tourist office. We entered the hotel and the desk staff looked it up for us and informed us that the office was now located at 69 Diezingoff St–about two miles away.

Terri and I walked the two miles and discovered that the address 69 does not exist on Diezingoff. But that turned out to be right near City Hall, so we did get to see City Hall! We visited the information desk for the city and they cheerfully informed us that the Tourist Bureau is now located at 42 Herbert Samuel Street. Having had enough of a walk, we again took a taxi and arrived promptly at that address where oddly enough we found that the Tourist Bureau actually existed!

The staff in the Tourist Bureau were very friendly. We did get a few helpful maps and brochures and then asked about bus schedules. They threw their hands up in the air and said they couldn’t help us with any of that because the bus companies wouldn’t give them the information. They had no idea about the monthly passes or really anything except how to purchase tours at the hotels.

Our main project for the day was supposed to be a visit to the Eretz Israel museum (one of the best in the country), so we asked how to get there. They told us that we needed the #25 bus (which turned out to be correct), but their advice on where to get the #25 bus turned out to be wrong. The place they sent us to had the #31 bus, the #16 bus and the #17 bus, but no #25. Terri was still interested in seeing if we could get the pass, so instead of searching further for the #25 bus, we took the #17 to the Central Bus Station (Tahanah Merkazit).

I surprised myself by actually recognizing the place (yes, it is huge, but I’ve been gone over 30 years). We entered the bustling place and discovered it was more a marketplace than a bus station. First I went to the Egged information desk. Egged is the bus company that runs most of the intercity lines. “Do you have have monthly passes?” “Yes, but they only work for a calendar month, so not a good deal today.” OK, we struck out there. On to the Dan bus company (Dan runs most of the intracity lines). There we encountered a cheerful desk where they happily had us fill out forms, took our picture for a photo ID card and then informed us that they too ran their passes on a calendar month basis, so no sense putting any money on our brand new photo ID cards.

By this time Terri was famished, so we headed for one of the many food stands. We purchased two pastries stuffed with cheese and a Diet Coke. I wasn’t surprised when the merchant said 30 shekels (about $8) since that was in line with prices in restaurants we have encountered, but when I handed him 30 shekels he was astonished and returned most of the money to me. Turns out he had said 13 shekels not 30, so our lunch actually came to only a little over $3. But what most impressed me was the honesty in this place–no way the merchants in most American bus stations would have so zealously returned my money.

We also saw this in taxis. Twice now I’ve tried to give the taxi driver a tip and both times they returned the money to me saying that I had given them too much.

So honesty is widespread in Tel Aviv, but knowledge, not so much. The “information desk” of the Dan bus station provided us with incorrect information about how to get to the museum. Fortunately I asked the bus driver and he sent us to another bus that would at least get us closer to our destination. Terri and I took that one (the #5). It dropped us off a little short of the museum, but a walk across the Yarkon River took us exactly to the museum–or a corner of it. We had to choose between walking one way or the other and of course we chose wrong.

We backtracked to the corner and made the other choice and soon enough we were at the entrance to the museum. It was 3pm and the museum closed at 4, so that was that. We took the bus (#25!) which let us off right near our apartment building.

The upshot of this is that we could have 1) walked to the museum from our apartment and arrived in about a half hour; or 2) we could have taken the #25 bus from near our apartment and arrived in 15 minutes. Instead, we spent about $12 on cabs, walked a total of 8.5 miles, spent 5 hours traveling and never made it to the actual exhibits of the museum. But we did get to the all-important gift shop where I was able to find a lovely book by Joseph Naveh, one of my favorite scholars, on the topic of ancient writing systems.

OK, we saw many slices of Tel Aviv life. Crazies on buses, bureaucratic inanity, and it was all in good fun. Fortunately we don’t really have much of a plan. Whatever comes our way we’ll enjoy. So it wasn’t a bust after all. 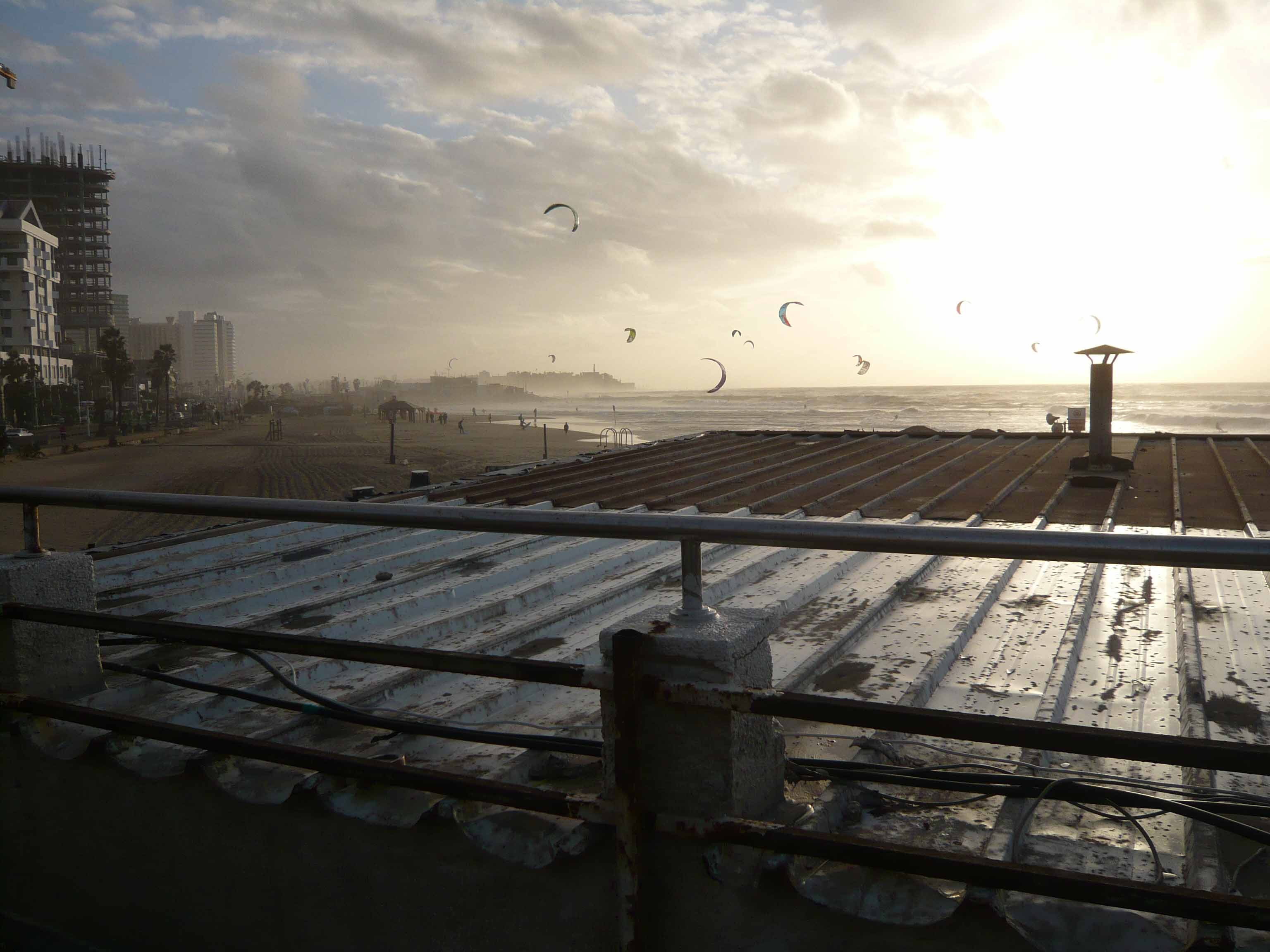 Parasails Above the Mediterranean Viewed over a Roof